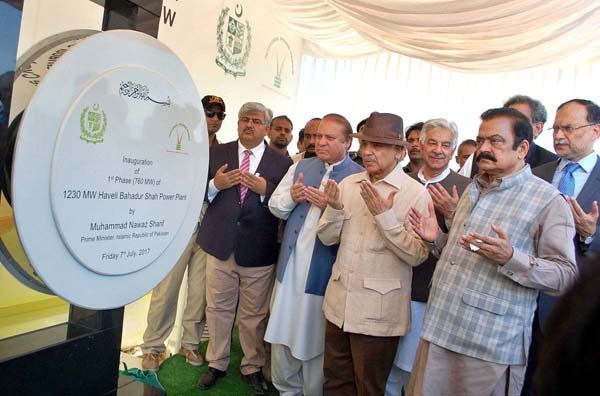 Prime Minister Muhammad Nawaz Sharif Friday inaugurated the first unit of the Haveli Bahadur Shah Power Plant, adding 760 MW of electricity to the national grid in a step forward towards ridding the country of load shedding.

The environment friendly power plant has a capacity of 1,230 MW through a Combined Cycle Power Plant and would fueled by Liquefied Natural Gas (LNG).

The prime minister also visited the Control Room and witnessed the plant and its functioning. He was also informed about the plant whose first unit had been made operational in a record period of only 21 months including completion of civil works, construction of switchyard, cooling towers, fuel storage tanks and installation of gas turbine and generators.

He was informed that the installed unit was world’s most efficient and modern with guaranteed efficiency of 62.44% on LNG. A saving of Rs 57 billion had been achieved in the project cost as compared to the upfront tariff given by NEPRA, owing to a transparent procurement process, through international competitive bidding and PPRA laws.

The prime minister was informed that the award of Engineering Procurement Contract (EPC) for the project led to one of the lowest EPC cost per Megawatt resulting in an annual saving of rupees two billion through optimum operations and management cost. The project would be completed with an estimated cost of Rs 55 billion.

Haveli Bahadur Shah Power Plant Project had also set the record of fastest gas turbine installation from arrival of turbines on site – 94 days and 73 days respectively for the two turbines.

Prime Minister Nawaz Sharif had laid the foundation stone of the power plant on October 16, 2016 and planned
to complete in two years, saving Rs 6.6 billion on annual basis.

The plant, established about 27 kilometers away from Jhang city would produce electricity at the rate of Rs 6.42 per unit.