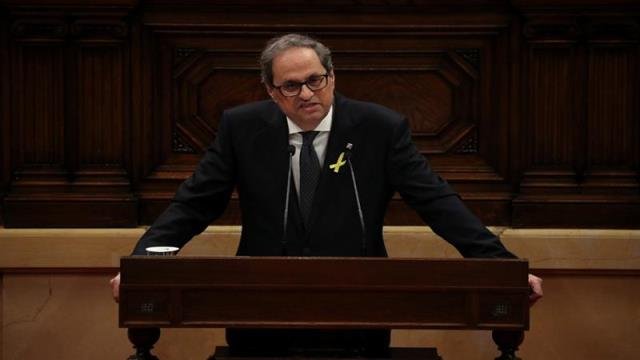 Torra, narrowly elected by the Catalan parliament on Friday, has promised to draft a constitution for a future Catalan Republic and restore regional laws that were suspended by Spanish courts in the wake of Catalonia’s October 1 independence referendum.

A close ally of former Catalan leader Carles Puigdemont, Torra won the ballot by a simple majority with the backing of 66 parliamentarians and four abstentions. Sixty-five lawmakers voted against him.

Torra failed to win a prior ballot – which had required an absolute majority – on Saturday in the 135-member Catalan parliament, falling short of the 68 votes required to be elected.

There are currently 70 lawmakers in the regional parliament who are pro-independence, against 65 who are not.

Puigdemont, who handpicked Torra for the presidency,  described Torra as a “very honourable” president in a Tweet on Monday following the parliamentary vote.

“Congratulations [Quim Torra], very Honorable President of the Generalitat de Catalunya. Culture and freedom, and democracy. All my love and support, with immense thanks! Long Live Catalonia!,” Puigdemont said.

Puigdemont is currently in self-exile in Germany and faces jail if he returns to Spain.

Other Catalan politicians, such as Jordi Sanchez, are being held in Spanish prisons, charged with rebellion for their role in the independence drive.

Catalonia has been in political limbo since Spain’s central government sacked Puigdemont and his cabinet and imposed direct rule on the semi-autonomous region after it unilaterally declared independence on October 27 following a controversial referendum on the issue.

Regional elections were held in December, during which pro-independence parties won a majority of seats in the Catalan parliament, but five attempts to elect a new president and form a coalition government since then have failed.

Spanish Prime Minister Mariano Rajoy has warned Article 155 of the constitution, which Madrid used to impose direct rule on Catalonia, “could be used again if necessary”, if the region’s next government does not adhere to Spanish law.

Following Torra’s election, Rajoy called for “understanding and harmony” but reiterated Spanish law under the country’s 1978 constitution would be “fulfilled”.