US Moves Embassy to Jerusalem, Israeli Forces Kill At Least 41 and Injured 2,000 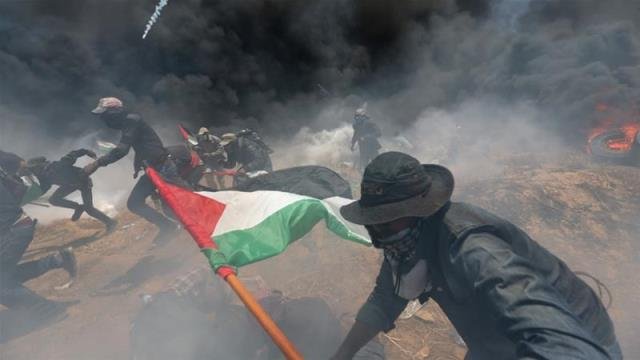 The United States has officially relocated its embassy from Tel Aviv to Jerusalem, in a deeply controversial move that angered Palestinians and drew widespread international condemnation.

The ceremony on Monday took place amid road closures and heavy police presence in anticipation of Palestinian protests.

US President Donald Trump – who in December 2017 declared Jerusalem as Israel’s capital, a move long-sought by Israel –  addressed the ceremony via a recorded video message.

“Today we follow through on this recognition and open our embassy in the historic and sacred land of Jerusalem and we’re opening it many, many years ahead of schedule,” Trump said.

He added that the US “remains fully committed to facilitating a lasting peace agreement”.

According to Israeli police spokesperson Micky Rosenfeld, up to 1,000 officers were posted around the embassy’s new location in the southwest neighbourhood of Arnona and its surrounding areas.

The closures spread to occupied East Jerusalem, where access to the Old City was curtailed from areas extending to it such as al-Tur, Mount of Olives, Sheikh Jarrah and Silwan.

Protests have spread across the occupied Palestinian territories.

At least 41 people killed in Gaza and nearly 2,000 wounded during demonstrations that are part of a weeks-long protest calling for the right of return for Palestinian refugees to the areas they were forcibly expelled from in 1948.

At the Qalandiya checkpoint in the West Bank, Israeli soldiers fired tear gas and rubber bullets at Palestinian youth who were throwing stones.

Later on Monday, a protest rally was expected to make its way to the new US embassy location, but with the road closures the demonstration is not expected to reach its destination.

In a statement released on Monday, the Palestinian Authority described Trump’s decision to recognise Jerusalem as Israel’s capital and the US embassy move as “blatant violations of international law and disregard to the core values of justice and morality”.

“Choosing a tragic day in Palestinian history shows great insensibility and disrespect for the core principles of the peace process,” the statement said, referring to the Nakba, where Palestinians commemorate their ethnic cleansing by Zionist paramilitaries back in 1948.

“We convey our sincere gratitude to all countries that had the moral responsibility to stand by international legitimacy to protect Jerusalem and support the Palestinians hope for peace.”

Riyad al-Malki, the Palestinian foreign minister, said on Monday that the Palestinian leadership will go to the International Criminal Court and was preparing to file documents on crimes committed by Israel.

Speaking to old a local radio station, al-Malki called for an urgent meeting of the Arab League, which he said would be followed by meetings at the UN Security Council.

Leaders from Jordan, Turkey, Egypt, Iran, Lebanon and other countries in the region strongly condemned the US move.