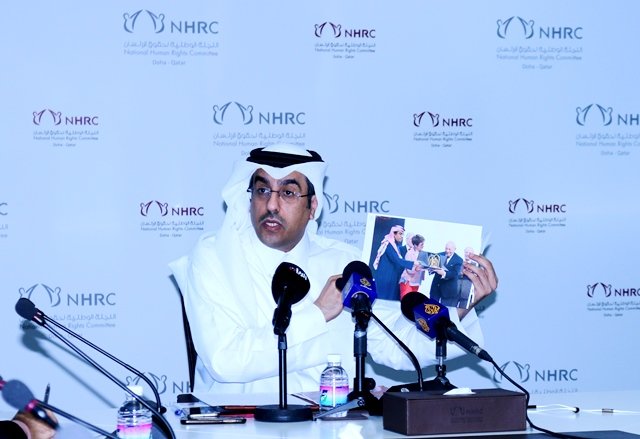 In a press conference, Dr al-Marri reviewed the negative and humanitarian impact on Qatar’s citizens and citizens of the Gulf Co-operation Council (GCC) countries, particularly the three Gulf countries that have severed their relations with Qatar – including violations of civil, economic, social and cultural rights, which amount to collective punishment.

He noted that these violations have affected the right to freedom of movement, the right to education, health, the right to family reunification, forced displacement, private property and work, noting that the Committee has monitored numerous violations in these areas.

Dr Al-Marri warned that further violations would affect civil peace and security which would have serious and complex repercussions.

He called for urgent intervention by the human rights organisations and the UN High Commissioner for Human Rights to the governments of Saudi Arabia, the UAE and Bahrain to stop the violations that resulted from air, land and sea embargo.

He added that over the past two days, the committee had received numerous complaints and appeals from citizens, nationals, as well as Saudi, Emirati and Bahraini nationals who confirm violations of human rights following these measures.

He said that each country has the right to sever its diplomatic relations with any other country but does not have the right to violate the international human rights conventions it has signed, calling on the said countries to back away from those decisions that caused human rights violations.

Dr Al-Marri revealed that a delegation of Amnesty International is visiting Qatar tomorrow on Wednesday to meet National Human Rights Committee to discuss the human rights violations caused by the aforementioned decisions.

Dr. Al-Marri also rejected a report published in AlArabia which says Qatar and Iran held a conference in beginning of this year and accused Saudi Arabia on human rights violations. He said that National Human Rights Committee (NHRC) and the United Nations Commission on Human Rights jointly held an international conference to discuss promoting and protecting human rights in the Arab World.