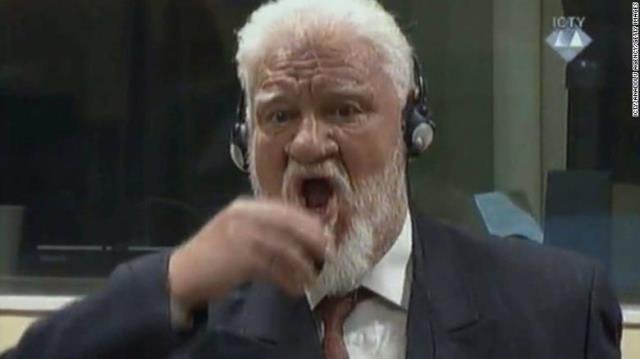 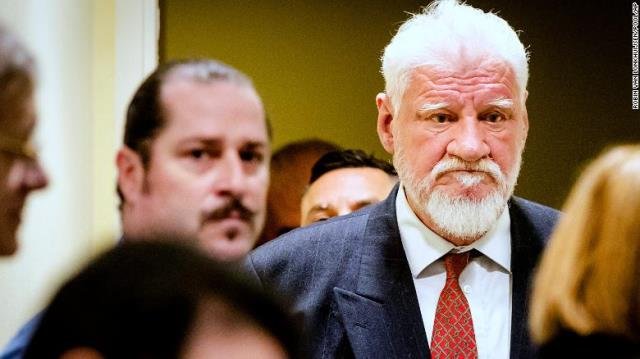 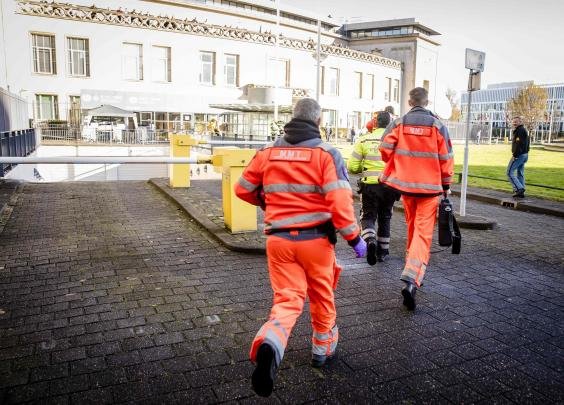 A former Bosnian Croat general has died after apparently swallowing poison as a judge at the Hague upheld his 20-year sentence for war crimes.

Footage from the International Criminal Tribunal for the Former Yugoslavia (ICTY) showed 72-year-old Slobodan Praljak tilt his head back and drink from a small glass bottle as the presiding judge read out the verdict.
“Slobodan Praljak is not a war criminal. I am rejecting your verdict with contempt,” Praljak shouted before swallowing the liquid.
The judge was then heard immediately suspending proceedings and asking for the curtains to be drawn. An ambulance was at the building shortly and paramedics raced up to the courtroom, Reuters reported.
The courtroom was being treated as a crime scene, an ICTY spokesperson told CNN.
Crotian Former General Slobodan Praljak drinking a small bottle of liquid during a Yugoslav War Crimes Tribunal in The Hague on November 29.
Croatia’s Prime Minister, Andrej Plenkovic, later confirmed the former general had died and offered his condolences.
“On behalf of the Government of the Republic of Croatia and on my own behalf, I want to express my deepest condolences to the family of General Slobodan Praljak,” Plenkovic said, according to a tweet from an official government account.
The nature of the substance ingested by Praljak was not immediately clear.
Praljak, a former assistant defense minister of Croatia and commander of the Croatian Defense Council, was appealing a jail term of 20 years in prison.
He was one of six former Bosnian Croat leaders found guilty of crimes against humanity and war crimes, including the rape and murder of Bosnian Muslims, in 2013.
Praljak played an important role in securing weapons and ammunition for the Croatian Defense Council army, according to the original indictment.
The offenses, which date to between 1992 and 1994, were part of a wider conflict that followed the breakup of the former Yugoslavia in the early 1990s.
The appeal judges upheld the findings of an earlier trial that implicated the Croatian regime under then-President Franjo Tudjman in a criminal conspiracy with the goal of “ethnic cleansing of the Muslim population” of parts of Bosnia to ensure Croatian domination.
The Bosnian Croat leadership, along with Croat leaders, wanted to make this territory part of a “Greater Croatia,” the ICTY said when the case first went through the court.
The six received sentences that ranged from 10 to 25 years. No further appeals are possible.
November 30, 2017 / Current Affairs