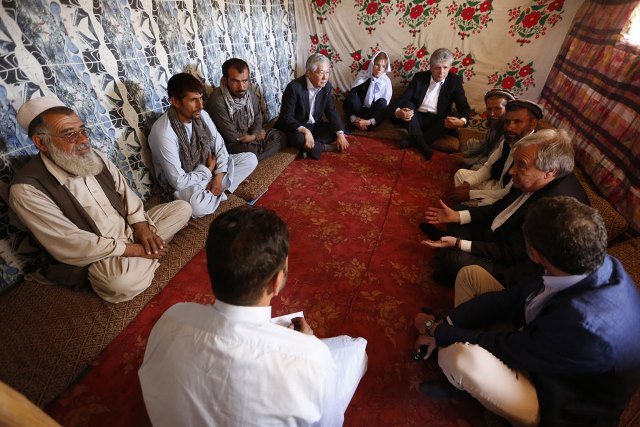 14 June 2017 – Expressing solidarity with Afghan people, in the wake of recent violence in the country, United Nations Secretary-General António Guterres today underscored the Organization’s full commitment to work with the Government and people of the country to build a sustainable and prosperous future for them.

“Peace is the solution […] the international community, the neighbouring countries [and] all those related to the Afghan crisis need to come together and understand that this is a war that has no military solution,” said the Secretary-General, at a press conference in Kabul, where he arrived earlier today.

“We need to have peace,” he added, underscoring that at the same time, the level of humanitarian assistance to the country had to be increased and conditions needed to be created for Afghanis to be able to live in dignity.

Since his time as the UN High Commissioner for Refugees (2005-2015), Mr. Guterres has been paying a solidarity visit to Muslim communities during the holy month of Ramadan, and his visit to Afghanistan was a continuation of his expression of solidarity with them.

While in Kabul, the UN chief met with displaced men and women from the Kapisa province, now living in a settlement on the outskirts of Kabul.

In their interaction, the displaced persons underscored that security remained the prerequisite for their return to their homes and that education, including for women and girls was critical for supporting themselves and their families. They also stressed their need for medical care.

“I have an enormous admiration for the courage and the resilience of the Afghan people, and they were very eloquently demonstrated in my meeting this morning,” noted the UN chief.

The Secretary-General also held bilateral meetings with Ashraf Ghani, the President of Afghanistan, as well as the country’s Chief Executive Officer, Abdullah Abdullah, where they discussed cooperation between the Organization and the Government of Afghanistan as well as the security situation in the country and the need to better mobilize the international community to counter terrorism.