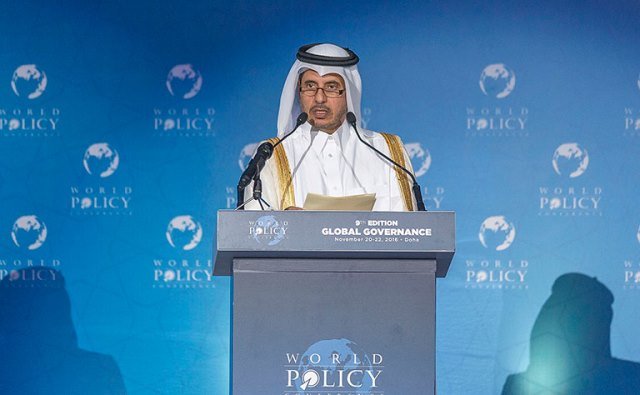 ‘ The phenomenon of terrorism has become a serious threat to the Middle East and global stability in economic, political, social, security and development areas’, Sheikh Abdullah bin Nasser bin Khalifa Al-Thani, Prime Minister and Interior Minister of State of Qatar said in his opening address of 9th World Conference in Doha.

He said that countering terrorism should not be limited to the security aspects, despite its importance, stressing the need for collective efforts to confront terrorism at the national, regional and international level, including cultural, intellectual, ideological, economic, social and media aspects.

Sheikh Abdullah bin Nasser bin Khalifa Al-Thani said that all are aware of the need to take advantage of youth’s energies and abilities as they are the future of the peoples and nations, adding that this will be achieved only by protecting them and fulfilling their hopes and aspirations which require taking the necessary measures to deal with their problems so as not to be easy prey for terrorist groups.

He said that the world is still looking for the potentials to stimulate economic growth and improve its pace as an important input for the realization of social justice and stability that people aspire to.

Sheikh Abdullah said that development challenges must be faced and its risks and negative effects on the political and social stability must be overcome, especially in the least developed countries, calling on the International Community to support the efforts of these countries to achieve their goals in economic and social development as well as other fields through the fulfillment of the international commitments on development aid in all its forms.

He pointed out that the State of Qatar has spared no effort in providing development assistance and fulfilling its international obligations in this regard for many regions of the world, adding that Qatar has made great achievements in sustainable development in accordance with international and regional reports, particularly in areas such as education, health, employment, youth, human rights and economic growth thanks to the wise leadership of Emir Sheikh Tamim bin Hamad Al-Thani and his keenness to achieve the aspirations of the Qatari people in all aspects of life.

Prime Minister of Qatar reassured that Qatar will continue its permanent development to achieve prosperity and sustainable development for the Qatari people through Vision 2030 and the related strategic plans to consolidate a modern state based on justice, the rule of law, openness in foreign relations in accordance with strong bases and pillars, especially the mutual respect, common interests according to the rules of international legitimacy, interaction between peoples, cultures and civilizations, respect for human rights and peaceful settlement of disputes.

Sheikh Abdullah bin Nasser bin Khalifa Al-Thani emphasized the importance of the issues and topics of this conference, including the changes currently witnessed by the world, especially in the European Union, looking forward to the outcomes of the discussions to achieve the desired goal of this conference for the security, stability and sustainable development in the world.

20 January 2022 By Ashraf Siddiqui More than 7,000 books of different ...
END_OF_DOCUMENT_TOKEN_TO_BE_REPLACED