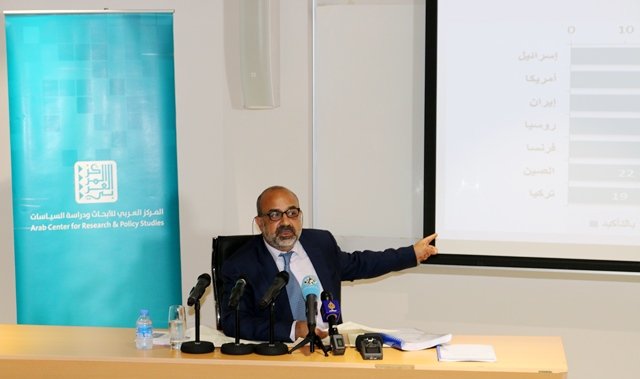 Dr. Mohammad Almasri, Coordinator of the Arab Opinion Index released the results from 2016 survey in a press conference held at the Center For Conflict & Humanitarian, Doha Institute recently.

Results from the 2016 survey show an overwhelming majority (89%) of Arabs are in opposition to the group known as the Islamic State of Iraq and the Levant; only 2% of respondents expressed having “Very positive” views of ISIL while another 3% expressed views which were “Positive to some extent”.

This is further corroborated by the fact that when asked to explain ISIL’s popularity among its support base, only around 20% of respondents attribute this popularity to religious factors.

The 2016 Arab Opinion Index is the fifth in a series of yearly public opinion surveys across the Arab world. The first survey was conducted in 2011, with following surveys in 2012/2013 and 2014.

With an aggregate sample size of 18,310 respondents (50% of whom were men and 50% women). The Arab Opinion Index remains the largest public opinion survey covering the Middle East and North Africa. The fieldwork was carried out by an overall team of 840 individuals (half of whom were women), who conducted 45,000 hours of face-to-face interviews, covering a total of 760,000 kilometers across the population clusters sampled.

Looking specifically at the ascendancy of Islamist political movements which may arise from the Arab Spring, 52% of respondents stated that they were worried, to varying extents, about the rise to power of such groups, compared to 42% who stated that they were not worried about Islamists coming to power. By comparison, 59% of respondents expressed their concerns/worries of the rise to power of non-religious/secular groups, while 33% stated they had no worries of secularists coming to power.

These two large blocs understate the sharp sense of disarray in Arab public opinion, with political groups
on both sides of a polarized divide eliciting the anxieties of Arab citizens in roughly equal measure. The public worries which surround the rise to power of such groups could be a potential obstacle to a wider democratic transition in the Arab region, paving the way for authoritarian institutions to exploit public fears and regain power.

Overall, a strong majority (77%) of Arabs believe that the various peoples of the Arab region constitute a “single nation”, even if some respondents qualify this belief. Only 19% maintain that the different Arab peoples are distinct nations tied by only tenuous bonds.

In specific terms, 75% of the Arab public has negative views of the foreign policy of the United States towards Palestine, Syria, Iraq, Libya and Yemen. Similarly, around 66% of Arabs view negatively the policies of both Russia and Iran towards the same set of Arab countries.

In a similar question, 89% of Arabs agreed that Israel is a threat to the stability of the Arab region; 81% agreed that US policies destabilized the region; and 73% regarded Iranian policies as destabilizing.

The comparative figures for Russian and French policies were 69% and 59%, respectively. In sum, there is a firmly entrenched public view which regards Israeli policies as destabilizing to the region.

This was in line with a widespread negative view of Israel, with the overwhelming majority (86%) of Arabs renouncing official recognition of Israel by their home countries.

Respondents who disavowed official recognition of Israel by their governments gave a number of reasons for their positions. Almost universally, these were framed in political terms and focused on the colonialist policies of Israel towards the Palestinians as well as its expansionism with regards to other Arab countries.

As explained by Dr. Mohammad Almasri, Coordinator of the Arab Opinion Index, during the press conference, Arab animosity towards was not framed in cultural or religious terms.

Respondents offered a variety of answers when asked to define the single most pressing problem facing their country. The largest group, 44%, described their countries’ most pressing problems as economic, while 20% offered priorities related to governmental performance, the stalled democratic transition, deficiencies in public services and the spread of financial and administrative corruption.

Compared to 2014 and 2015, findings from the 2016 survey show a decline in the proportion of respondents who gave safety and security concerns as the most pressing problems for their governments to resolve.

The results of the 2016 Arab Opinion reveal a widespread, and total, lack of satisfaction with their own financial circumstances. A full 49% of respondents reported that while their household incomes were sufficient to cover necessary expenditures, they could not make any savings (these families are designated as those living “in hardship”). Another 29% of citizens in the Arab region live “in need”, in that their household incomes do not cover their necessary expenditures.

In the face of generally negative evaluations of the political orders of their home countries, a large majority of Arabs (72%) expressed views supportive of democracy, compared to 22% who could be said to oppose democracy. Similarly, 77% agreed that a multi-party democracy was a good form of government for their home countries.

Most Arabs define their own religious in one of three ways: “Religious to some extent” (65%) or “Very religious” (20%), only 11% of Arabs defined themselves as “Not religious”.

While a majority of Arabs are religious, to varying extents, this does not preclude widespread religious tolerance: vast majorities of respondents believe that no religious authorities have the right to denounce followers of variant interpretations of their own religion, or to declare followers of other religions to be apostates. Additionally, a majority of Arabs show no real preferences for other religious individuals in their personal, dayto-day dealings, nor do they believe that irreligious people are generally worse individuals than they are.

Majorities of respondents believe that clerics should influence neither government decisions nor voting behavior at the elections. This remains true despite the fact that no majority of Arabs exists which is in-principle opposed to a separation of religion from public life.