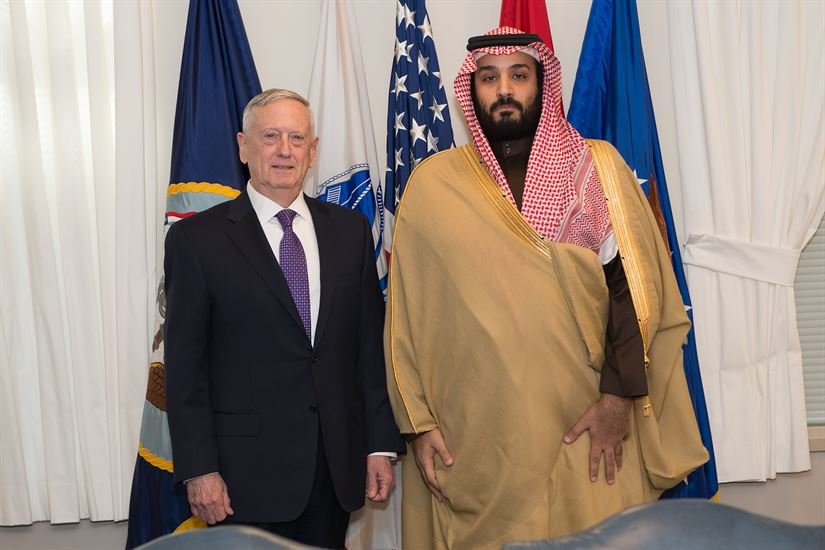 The deputy crown prince also met earlier in the week with President Donald J. Trump at the White House.

In remarks before the meeting, Mattis noted that relations between the United States and Saudi Arabia began in February 1945 when President Franklin D. Roosevelt and King Ibn Saud met aboard the U.S. Navy cruiser Quincy in the Great Bitter Lake segment of the Suez Canal.

It was the first face-to-face meeting between top American and Saudi leaders.

“The warmth of that relationship has held firm through good times and bad times over 70-odd years now and it’s been the basis for an indispensable economic and security partnership together,” Mattis said.

The kingdom’s leadership provides stability in the region, he added, and the U.S.-Saudi military-to-military relationship remains steady and consistent.

“I appreciate your vigorous leadership, your political commitment and your willingness to broaden and deepen the kingdom’s support for our common efforts,” Mattis told bin Salman.

In his remarks, the Deputy Crown Prince said Saudi Arabia is at the front line facing hostile activities as the Iranian regime supports extremists and terrorists in the region and around the world, and challenges posed by terrorist organizations.

They also discussed the Middle East security environment, including confronting Iran’s destabilizing regional activities, he added, and U.S.-Saudi Arabia military cooperation in defeating the Islamic State of Iraq and Syria and other transnational terrorist organizations.

The two leaders said they look forward to deepening their nations’ defense partnership and continuing to work closely together, Davis said.