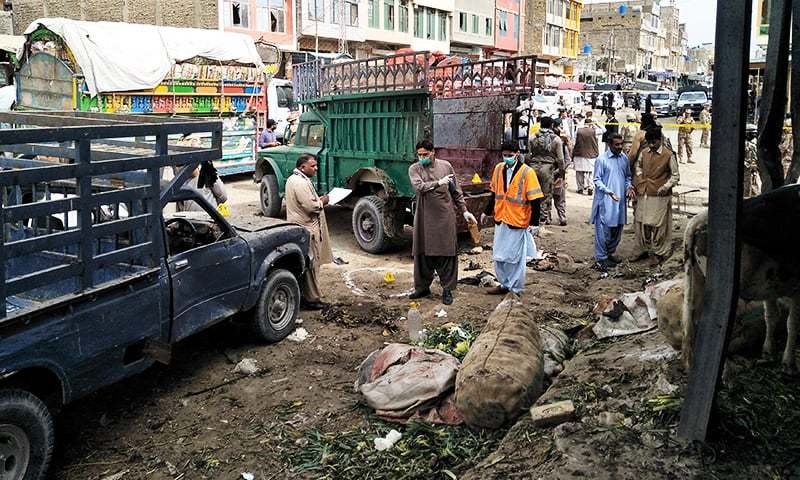 At least 20 people were killed and 48 injured in a blast believed to be targeting members of the Hazara community in Quetta’s Hazarganji market on Friday morning.

The attack claimed the lives of nine Hazara and one Frontier Corps (FC) soldier who was deputed for the community’s security, said Deputy Inspector General (DIG) Abdul Razzaq Cheema. The 10 others who lost their lives included shopkeepers, businessmen and citizens working or residing in the area.

Four FC soldiers were among the injured.

DIG Cheema, who was present at the site of the attack, said the blast targeted the Hazara ethnic community.

“The attack took place in a [green grocer’s] shop. An Improvised Explosive Device (IED) was planted in a gunny sack filled with potatoes. Whether it was timed or remote-controlled, our experts will tell. Right now they are investigating,” DIG Cheema told reporters at the site of the attack.

“We are giving our attention to the wounded at this time,” he said. The injured have been shifted to hospitals ─ where an emergency has been imposed ─ for treatment.

“We have arranged transportation back [home] for Hazaras who remained unhurt in the attack,” he added.

However, Home Minister Ziaullah Langove, who held a press conference later in the day, said that the blast was not targeting “a specific community”.

“Our guess is that no specific community was targeted. Marri Baloch and FC personnel were among those killed as well. The numbers of the Hazara community were just greater,” Langove said.

He also described the blast as a suicide attack.

Prime Minister Imran Khan condemned “the terrorist attack” and sought “an immediate inquiry and increased security for the [targeted] people”.

“Once again our people were the target and once again we will have to bury our dear ones,” he said.

“We demand more security from the government and all those involved in today’s act of terrorism should be found and punished.”

It was decided in the meeting that the affected families will be given immediate financial assistance and that the provincial government will bear the treatment cost of those injured.

Furthermore, it was decided that closed-circuit television (CCTV) cameras will be immediately installed at the Hazarganji market and other public places. Action on terrorists’ hideouts and against their leaders will also be boosted, the caucus affirmed.

Doha, 24 Sept. 2022 (QE) QatarEnergy announced that it has selected ...
END_OF_DOCUMENT_TOKEN_TO_BE_REPLACED