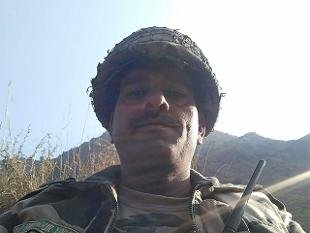 T. B. Yadav, an Indian Border Security Constable from 29th Battalion has posted three videos of total four minutes on the social media complaining of bad quality of food served to the troops. The Battalion is deployed on Line of Control in Kashmir region between Pakistan and India.

In his camouflage military uniform and rifle in his hand, a picture is posted on the social media claiming that ‘have to go empty stomach at times on 11 hours long job and at times standing whole day.’ He said that government procures essential for them, the seniors sell it illegally in the market.

The soldier has also posted pictures of the food served to the Indian Border Force personnel. Indian media reports that the allegation prompted boarder guarding force an inquiry into the matter.

It says that at lunch they are only served pulses cooked merely in turmeric and salt along with bread, how a soldier can perform his duty in such conditions.

‘ I request the Prime Minister to get this probed ‘, T. B. Yadav says.

As per Indian media reports, a DIG rank officer is conducting the investigation in this regard.