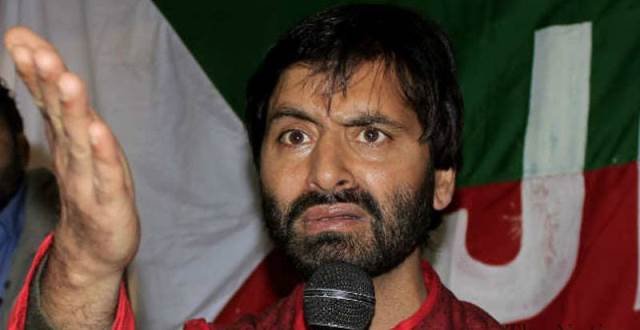 According to KMS, Yasin Malik in a media interview in Srinagar said that he would not hesitate to spill his blood to sabotage the PDP-BJP regime’s move. He said that in Jammu and Kashmir, the State Subject Law has been in vogue since Maharaja Hari Singh’s time. It is because Jammu and Kashmir is rich in water resources and has a vast forestland that the State Subject Law was enacted to ensure no outsider buys property here to settle down, he said.

Yasin Malik said that unfortunately the ruling PDP-BJP regime was hell-bent upon changing demography of Jammu and Kashmir by allowing non-state residents like refugees to settle in the territory. He said that ever since the inception PDP-BJP administration in occupied Kashmir, one or the other issue was being raked up to create confusion and push the Muslims to the wall.

“First the government triggered controversy by raking up issues like separate colonies for Kashmiri Pandits, then exclusive colonies for retired Indian soldiers and now (is) again issuing domicile certificates to refugees,” he pointed out.

The JKLF Chairman said that he would not hesitate to spill his blood to protect the State Subject Law. “We will not allow any move aimed at changing the demography of Jammu and Kashmir. We will oppose all such moves tooth and nail.”

He said “Kashmiri people can never be mute spectators on such moves. There will always be a tough resistance to defeat such designs.” Kashmiri leader in Indian held Kashmir said that such conspiracies were hatched to harm the disputed nature of Jammu and Kashmir and its Muslim majority character too.