Gulf Inmates Week Inaugurated, ‘Together to Achieve Reforms’ Takes Off 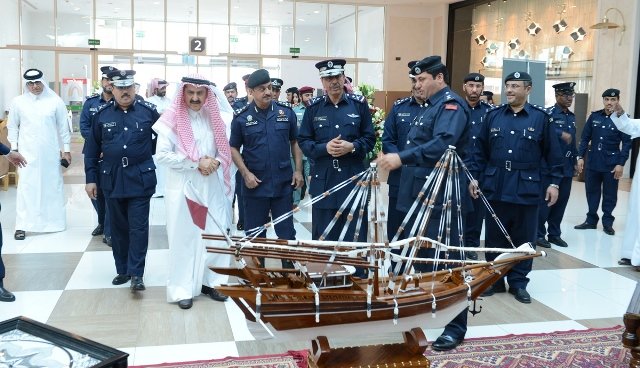 Staff Maj. Gen. Saad bin Jassim Al-Khulaifi, Director General of Public Security (DGPS) inaugurated 5th Gulf Inmates’ Week activities on Sunday, 25th December 2016 at Gulf Mall Doha. The Week is celebrated by all GCC countries under the slogan ‘ Together to Achieve Reform’ as per the directives of Their Excellencies the Interior Ministers of GCC countries.

Staff Maj. Gen. Saad bin Jassim Al Khulaifi, Director General of Public Security stressed on the importance of the GCC Inmates’ Week as the Interior Ministry is keen to celebrate it every year for its role in highlighting the efforts aimed at promoting positive behavior of inmates and work on their rehabilitation and reintegration.

He said that the Ministry’s message is clear in this regard, which helps the inmates to integrate them into the community making them active contributors to build a society with the participation of many government agencies and civil society organizations that join this celebration.

He said that participation of various departments and institutions reflects the true care and attention enjoyed by the inmates in the penal and correctional institutions in addition to the activities and programs that are provided them inside the Administration.

He assured that Qatar Ministry of Interior is focus on promoting positive behavior of the inmates and working on correctional measures, rehabilitation, educational and psychological programs to make them good members of the society so that they can help in elevating the society.

Brig. Khalifa Abdullah Al Nuaimi, Director General of the General Directorate of Criminal Investigation said that the importance of organizing the Gulf Inmates week is to reduce the gap between the prisoners and society and make them accepted in the society once they are released and reintegrated into society through aftercare.

He highlighted the efforts undertaken by the Ministry of Interior and the role of cooperating governmental or civil society organizations in the rehabilitation of inmates and providing support and assistance to their families. Moreover, the Week activities contribute in exchange of expertise and experiences among member states through their participation from GCC countries, he said.

With regard to the rights of inmates as a human beings, Director of Penal and Correctional Institutions Department (PCID) Brig. Mohammed Saud Al-Otaibi said that PCID is in constant contact with various human rights commissions and committees, and any activity carried out by the Department in the field of education, training or rehabilitation will be under the direct watch of these organizations. In general, prisoners’ rights are guaranteed by the provisions of the law and international conventions those are signed by State of Qatar.

He said that in spite of the limited number of female inmates, they are given high care and attention in terms of medical, psychological and rehabilitative support while taking into account the qualitative differences for the character commensurate with the women.

He told that the PCID does not differentiate between citizens and expatriates in the treatment and care as mandated by our Islamic values and our commitment to UN model rules for the care and rehabilitation of inmates, as they are eventually humans although they are violators.

Various activities will be held for public until 28th December 2016 daily in the evening from 5 pm to 7:30