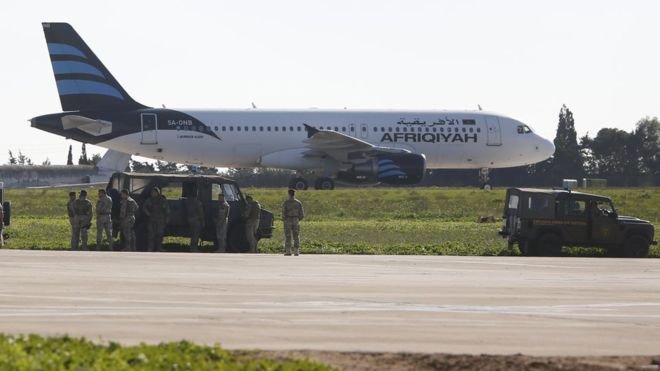 Afriqiyah Airways(Libya) domestic flight Airbus A320 with 111 passengers and seven Crew members on board has landed at Malta Airport around 1132 AM after it was hijacked. The plane was on an internal flight from Sebha to Tripoli and diverted by two hijackers who claimed to blow the aircraft carrying hand grenades.

It is learned that around 82 males, 28 female passengers and an infant along with seven crew members are on board. Airport officials said emergency teams had been sent to the site of what they described as “unlawful interference”.

Joseph Muscat, Prime Minister of Malta tweeted ‘he is informed of a potential hijack situation of an internal Libyan flight diverted to Malta. Security and emergency operations were standing by.’

It is also reported in media that hijackers are claiming to be pro-Gaddafi group Al Fatah Al Gadida. They have said that upon meeting their demands, all passengers will be released. Their demands are un-known.

According to BBC, Madga Magri Naudi, Deputy Mayor for Lija in Malta told the hijackers had yet to make demands. She said: “The request has not been made. This is a problem: we do not know what their requests are at the moment.”

It is also learned that Libyan transport minister is negotiating with the hijacker.

The tiny Mediterranean island of Malta is about 300 miles (500 km) north of the Libyan coast.

All flights inbound and out-bound of Malta have been cancelled.