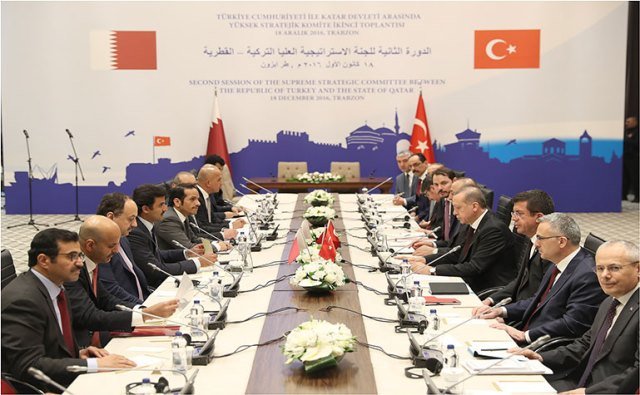 Turkish President said that the meeting was held on an extraordinary day that coincides with the National Day of State of Qatar. On behalf of the Turkish people and on his behalf, President Erdogan thanked Emir of Qatar and appreciated for the solidarity expressed with people of Aleppo by cancelling all festivities of this day.

President Erdogan praised the relations between the two countries, stressing the importance of developing and deepening them to serve the interests of both sides. He said that the agreements signed earlier in first meeting of the Committee and the one being signed today, will further strengthen bilateral relations.

The Turkish President said that the meeting being held at a sensitive and decisive phase for Turkey in its fight against terrorism, stressing the country’s continuation to combat it in all its forms and types. He paid his gratitude to Emir for Qatar for backing Turkish anti-terrorism efforts and strong support on the failed military coup in Turkey last July. He reminded that the first call he received was from Emir of Qatar.

President of Turkey lauded bilateralstrong relations shown from the visit of Father Emir Sheikh Hamad bin Khalifa Al-Thani to Turkey in the wake of the attempt as well as the visit of the Emir.

President Erdogan also praised the Turkish-GCC joint dialogue, expressing his pleasure on these dialogues which, he said, will contribute to supporting stability of the region.

He mentioned about exchange of views with Emir of Qatar on latest developments in Palestine, Syria, Iraq, Libya and Yemen. He stressed that Turkey’s support of legitimacy in Yemen based on Security Council resolution 2216, the Gulf initiative and outcomes of national dialogue conference.

Emir of Qatar strongly condemned criminal act, which is contrary to all divine religions and human values, stressing solidarity with the fraternal Republic of Turkey in all measures it takes to maintain its security and stability.

Emir of Qatar said that Qatar always supports Turkey against any terrorist challenges and stressed that what affects Turkey affects Qatar as well.

Sheikh Tamim bin Hamad AlThani paid his thanks to President Erdogan for the warm reception accorded to him and accompanying delegation. He expressed his satisfaction with the continued growth of the fraternal relations between the two countries.

Emir of State of Qatarsaid that the current visit confirms the strength of strategic relations and shared keenness to continue supporting them for the welfare and common interests of the two brotherly peoples.
Emir of Qatar said that outcome of present bilateral discussions will produce important results strengthening further towards closer cooperation between the two countries.

During the meeting, both sides also discussed and exchanged views on possibilities of various other areas of mutual benefits and of interests.