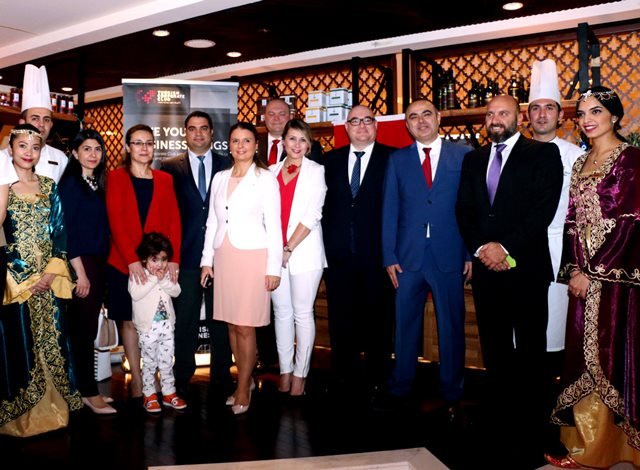 “What’s more,” Sonson said, “Chef Taylan Yucel and Chef Necdet Kaya, both specially arrived from Istanbul, have been working night and day to transform the Sridan buffet into a spread worthy of a sultan. We are eager to share Sridan’s delight in Turkish cuisine with all our visitors and guests.”

ATurkish ambassador So seriously is the Shangri-La taking its December event that the Turkish Ambassador and his wife have been invited as guests of honour to the opening cocktail party celebrating the launch at lunchtime on the first day of the Festival. Press representatives and other valued guests will also be present.

The restaurant has largely retained its existing décor for the Festival except for the addition of traditional, Turkish ‘Evil Eye’ decorations in crisp white and brilliant blue. But in an unusual twist, the universally recognised motifs have been cunningly concealed around Sridan so that visitors may find, photograph, and post them on social media in order to be entered into a lucky prize draw.

The grand prize is certainly something to celebrate. Sponsored by Turkish Airlines (Türk Hava Yolları), the Shangri-La Doha will award one fortunate participant with a pair of round-trip, business-class tickets to Istanbul for three nights’ unforgettable stay at the famous Shangri-La Bosphorus.

The prize draw is open to all Doha residents over 21 holding a valid Qatar residency permit. To participate, visit Sridan between 1 and 14 December and look for hidden ‘evil eyes’. Take a picture or a selfie with one, and share with Shangri-La on Facebook, Instagram or Twitter using the hashtags #TurkishAirlines #EvilEyeatSridan and #ShangriLaDoha. The lucky winner will be selected at random and announced on Sunday December 18, 2016 via social media.

Doha, 25 June 2022 THE Embassy of Nepal and the Non-Resident ...
END_OF_DOCUMENT_TOKEN_TO_BE_REPLACED