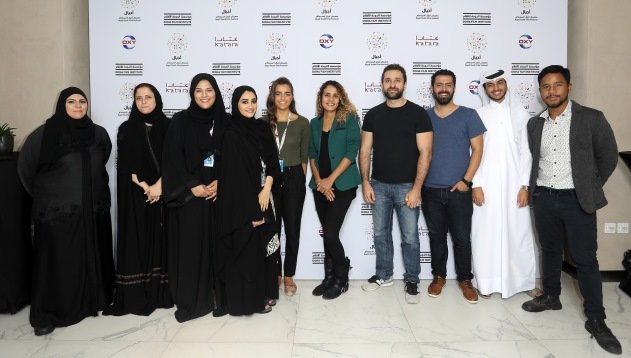 Seventeen films ‘Made in Qatar’ by youths in Qatar being presented by Doha Film Institute during 4th Ajyal Youth Film Festival makes history in Qatar. Some of these films have expanded their wings to Dubai International Film Festival to be held next week.

Hend Fakhroo, a Qatari writer and director of film ‘The Waiting Room’ screens at Ajyal and will also screen in competition at DIFF said “It is the production values, and the audience response that our films receive; the landscape has changed for the good. It is a shift from the days when people used to say ‘we will someday do films,’ to now, young people in Qatar making a statement with films made here.”

A full-time filmmaker, and proud to wear the label, Hend says there is an ecosystem to support filmmaking. Her film is a recipient of the Doha Film Institute grant and her next project, a full-length feature film, Parijat, is also DFI-supported.

With The Waiting Room, she brings a heartwarming story that has been drawn from personal experiences, narrating the story of two young women, each looking after a parent in intensive care. “We talk about parental illness and the toll it takes on us; for me, it was cathartic to make this film,” says Hend.

Superior production values are what set apart AJ Al Thani’s short film Kashta too. Supported by DFI, it is produced by The Film House in Doha, which shows how local production houses are now actively engaged in filmmaking. Justin Kramer of The Film House says Kashta was a story that had to be made. “Everyone in our organization is a filmmaker, and for us it was a great opportunity to collaborate on a film here in Qatar.”

AJ Al Thani was insistent that the film had superior production values, with a ‘Star Wars, Indiana Jones’ kind of vision. With Kashta, a film with a soul, the canvas is truly defining of how Qatari directors are pushing the envelope. Featuring young actors, she also had an added challenge in production. “We never really knew what to expect from them,’ says AJ Al Thani, but the children surprised them with their spontaneity. Kashta will also screen in competition at the Dubai fest after its screening in Ajyal.

In a strong example of how DFI promotes international collaborations, Qatari director Khalifa AlMarri brings his film Fragile, shot in France. A quirky tale about a couple on the verge of divorce, the film, he says, is based on a script by Raphaelle Desplechin that he adapted with a surprising climax. It was developed as part of AlMarri’s selection to the Gulf Summer University, supported by DFI and created by the French Ministry of Foreign Affairs through its Gulf Office and in association with the French National Film School, La Fémis.

AlMarri says the challenge was in directing professional actors, and is now confident that the experiences in filmmaking have made him bolder to pursue films as a serious vocation. “It was really a matter of going out and doing it; I made my first film myself, and the second with a professional team. It just shows that all you have to do is pursue your passion.”

A passion for films, asserts Qatari filmmaker Dana Al-Meer, makes all the difference. Her film Passport, screening at Ajyal, is clearly the result of her diligent efforts to work on films – having studied film at the University of Swansea in the UK.

“Doha Film Institute has been a great support,” says Al-Meer, who developed the film at a short film lab hosted by DFI. “You have the equipment, resources and the people to support you now. How easy can it get really! All you need is to work on your project.”

With Passport, Al-Meer also puts forth a tale of positivity and about putting the power to choose in the hands of women. The tale about a couple trying to secure a visa to the US, she says, has been drawn from real life incidents, and puts forth social realities in an effortless, breezy narrative.

The power of content and about Doha’s film industry making ambitious strides come full bloom in Qatari director Jassim Al Rumaihi’s documentary on Amer, the legendary Arabian stallion. Produced with the support of DFI, Amer: An Arabian Legend is a compelling story with a sweeping canvas, going all the way from Doha to France, where Amer lives in a farm now.

“Amer was always a fascination and mystery in our majlis discussions,” says Jassim, who had won the Best Documentary Award last year for The Palm Tree. “But in making the film, I also discovered that it is as much about Amer as about the people who care for him.

Jassim is a great example of Qatari talent taking wings, and says there is a clear opportunity and potential to build a vibrant Qatari film industry now. “Yes, we need legislation, infrastructure, greater private sector collaboration – but the fact is that, with Ajyal and the emerging community of filmmakers, the opportunity that exists is undeniable.”

Such opportunities and encouragement are what drove Mostafa Sheshtawy to quit his job as marketing analyst and turn full-time filmmaker in Qatar. His film Love Blood Test is a hearty satire that he says has been drawn from real life incidents.

“It was made in flat four weeks at a DFI workshop, and has family and close friends on the cast and crew – except for one actor,” he says. Mostafa adds that everything that he needed for the film – from equipment to mentoring – was at his disposal from DFI.

Qatari filmmaker Noor Al-Nasr too made her film with the support of DFI’s Short Filmmaking Lab. She says her passion for films is led by her love for writing, and her new short, Diana’s Kite was filmed in just one day. The film is an ode to childhood and how technology is changing the way of life. But her film is of hope – and on childish innocence and family bonding. “DFI pushes us to do – and that is important for emerging filmmakers,” she says.

Qatar’s infrastructure for films is further highlighted in 9956, a satire made by students at Northwestern University. Zaki Husssain’s quirky tale on how a disabled man refuses to be bound to the wheelchair and goes all out crawling had his friends Amal Ali and Habibah Abbas step in as producers. The film draws on local talent and is a straight-up satire that could evoke varied reactions form audiences – just what the director and producers want too.

Making the film was not smooth sailing, they say, but its selection to Ajyal is a vindication that films, made with passion, and honesty to the medium now have a platform to reach a wider audience through Doha Film Institute.