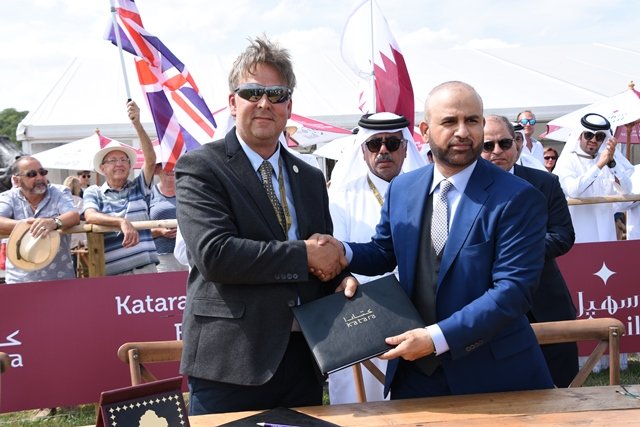 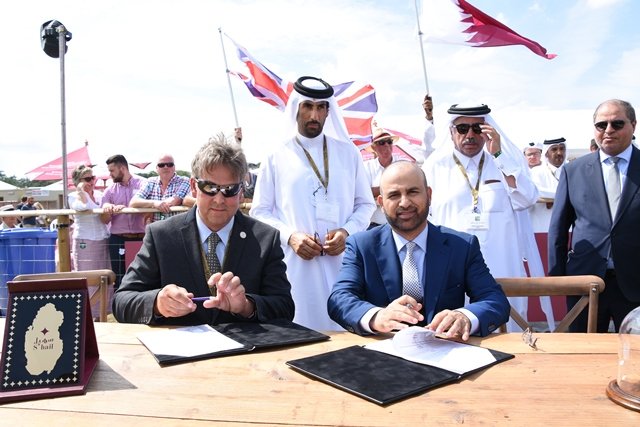 Katara’s International Hunting and Falconry Exhibition “S’hail” signed a 5 years long partnership and twinning agreement last Friday with the famous British based “The Game Fair” exhibition which is being held at Warwickshire, England and lasts till July 30.

The agreement comes as part of the organising committee of S’hail exhibition’s strategy to promote it and draw in more international contribution and participators. In a bid to capitalise on falconry’s soaring popularity around the world, the international agreement twins the Falconry Village at The Game Fair with S’hail, which takes place in Qatar in September.

The ceremony held in Brewin Dolphin Main Arena by The Game Fair  and the Mayor of Stratford-upon-Avon,  as a symbolic flag exchange took place in front of a large crowd.

S’hail has a significant presence at this year’s festival of the great British countryside and incorporated several components. S’hail is now Falconry Village sponsor and official partner of The Game Fair Enclosure – the exclusive area reserved for Gold and Platinum Package holders.

Organised in consultation with CJ’s Birds of Prey, the Falconry Village has always been a hugely popular part of The Game Fair. Both The Game Fair and S’hail were keen to highlight, compare and contrast the appeal and importance of falconry in the UK and Qatar, whilst focusing both on education and celebrating heritage.

James Gower, Managing Director of Game Fair, welcomed spectators to the ceremony, saying: “We firmly believe that a love for the outdoors should be enjoyed by everyone, far and wide. Therefore it is right that we twin with another superb event overseas. We see this as a long-lasting relationship spanning many years.”

Dr Khalid Bin Ibrahim Al-Sulaiti said: “It was one of the best ceremonies in the world. We are very happy to sign an agreement with The Game Fair for five years, to exchange experience between the two parties.”