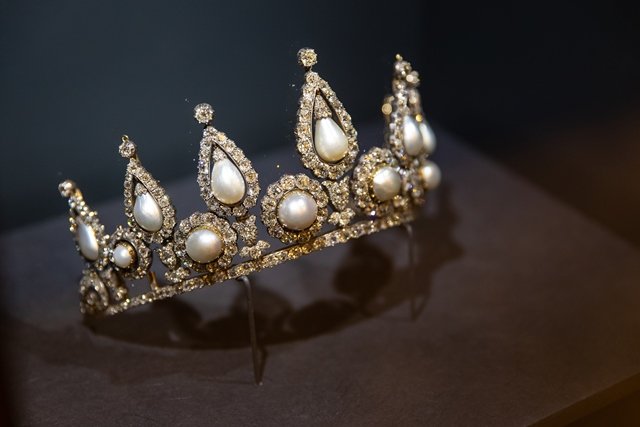 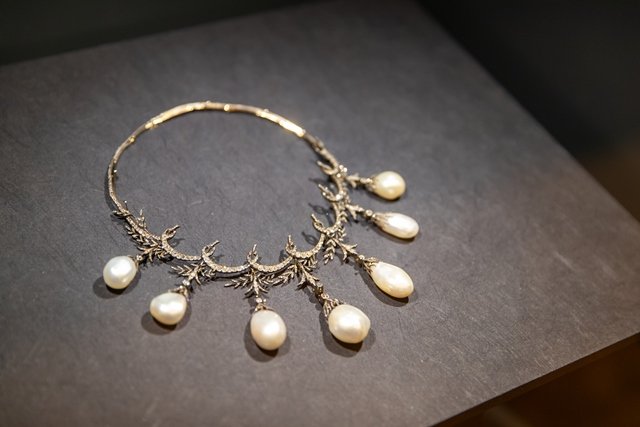 A new edition of the critically acclaimed Pearls – Treasures from the Seas and the Rivers exhibition was inaugurated in Moscow by Mansoor bin Ebrahim Al Mahmoud, CEO Qatar Museums and Special Advisor to  Chairperson of QM,  Fahad bin Mohammed Al Attiyah, Ambassador of Qatar to Russia and a number of guests. The exhibition is being organised as part of Qatar Russia 2018 Year of Culture’.

This is the sixth time that Pearls: Treasures from the Seas and the Rivers has travelled around the world, with the last show taking place in China as part of the Qatar China 2016 Year of Culture.

The exhibition displays 50 pieces of jewellery and other examples of pearl craftsmanship made from freshwater pearls born in Central Asia. It includes 20 new, never-before-shown artefacts specially selected for the exhibition in Russia. A QM exhibition is hosted by the World Diamond Museum at the Exhibition Center of the State Historical Museum in Moscow from 11 July 2018 to 1 October 2018.

The exhibition gives a rare opportunity to see some of the most beautiful pieces of pearl jewellery and rare natural pearls from Qatar Museums’ collection. The exhibition begins with an insight into the natural history of pearls and their formation, shedding light on many unknown facts that will amaze visitors and dispel common myths, like the fact that pearls are formed around a grain of sand. Visitors also have the opportunity to learn about the different kind of pearls created by shell fish from around the world, with a unique display of natural pearls, which includes rarities such as pearls from the American rivers.

The exhibit continues by telling a story of pearl fishing in Qatar. It draws a parallel between the history of pearl industry in Russia and in Qatar and shows jewellery and handcraft masterpieces of different countries and epochs: from an intricately cut figurine of the 17th century to a modern composition called “Frozen” by a Vietnamese master Sam Tho Duong.

Among other masterpiece objects on show at the State Historical Museum visitors will admire  jewellery pieces by Cartier, pearl earrings by Bvlgari worn by Elizabeth Taylor, a broch designed by the sketch of Salvador Dali, a spectacular tiara of Archduchess Marie Valerie of Austria and treasures from other European monarchies. The exhibition also shows pearl jewellery of various ethnicities and tribes, such as head decorations and earrings fromTibet and pearl artefacts from Russia and Central Asia.

The exhibition, which is considered one of QM’s flagship initiatives and is the first travelling exhibition organised by the institution, was designed to introduce audiences to the history and transformative impact that the pearl industry had on Qatar and the world. The exhibition reflects Qatar’s great curiosity for its own past and for rediscovering its heritage, often from a culture of oral history.  It chronicles pearl fishing in Qatar, providing an insight into the ancient methods and techniques used by pearl divers and an overview of the pearl trade in the Gulf. Archaeological excavations have confirmed that, long before oil and gas, another natural resource supported the growth and development of the country: pearls collected from the Arabian Gulf. Starting around 5,000 years ago, exporting loose pearls became a major source of income for Qatar. This gave rise to the development of major trade routes, which built the foundations of the region’s rich heritage and identity that is still visible today.

Russia and Qatar both share strong historical ties to pearls. In Russia, pearl usage in jewellery and textiles was omnipresent, stretching back to Byzantine traditions. Pearls used in Russia where not cultivated from sea oysters, however, but from mussels living in almost all rivers and lakes across the empire. They were sewn onto beautiful textiles, kokoshniks, jewellery and adorned everyday objects like horse saddles.

Commenting on the exhibition, its curator Dr. Hubert Bari said: “Pearls have long inspired artists and painters with their quiet elegance and mystery. This diverse exhibition will answer many of the questions surrounding these natural wonders, while taking visitors on a fascinating journey through the history of pearl diving and trade in Qatar. The exhibition is a major highlight of the Qatar Russia 2018 Year of Culture, which will see two great cultures explore unexpected historical parallels through the use of pearls in traditional design and jewellery making. We hope that this is something that will help bring our people and countries ever closer together.”

The Qatar Russia Year of Culture was officially launched in Doha in February 2018. The annual Year of Culture programme is made up of a wide variety of exhibitions and events in addition to literary and art workshops, film screenings, concerts, performances and trade shows part of which will be held in 2019.

The year is part of the landmark ‘Years of Culture’ initiative developed under the guidance of QM’s Chairperson Sheikha Al Mayassa bint Hamad bin Khalifa Al Thani in 2012. It is designed to deepen understanding between nations and their people through mutual exchanges of arts, culture and heritage. It also provides tangible opportunities to build sustainable links and cooperation between creative members of Qatari and Russian society and foster continuous collaboration.

Since its foundation in 2005, QM has been committed to nurturing a deeper understanding of Qatar’s long history of global connections. Through its focus on promoting art, creativity and heritage, it continues to place Qatar at the center of today’s cultural dialogues.