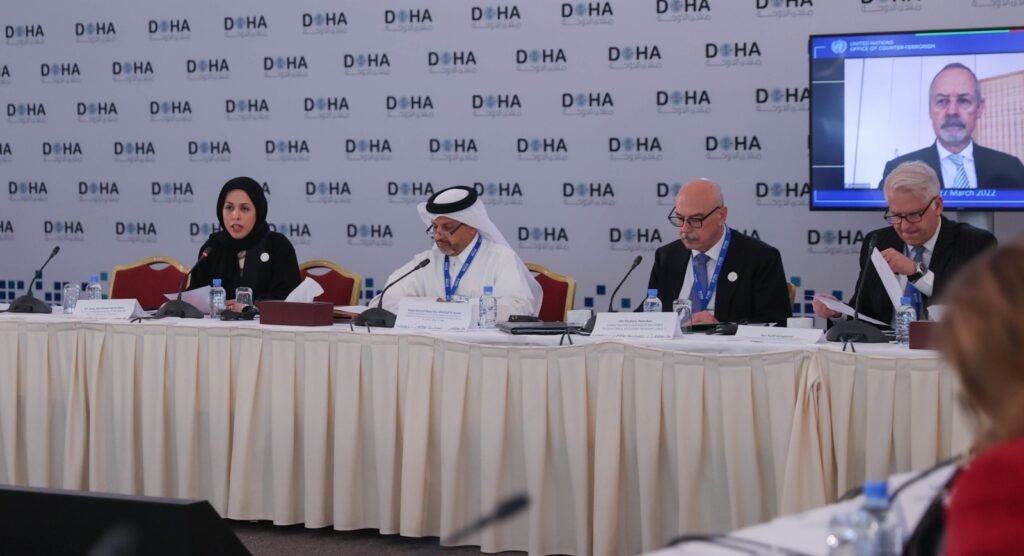 The Fourth High-Level Strategic Dialogue between the State of Qatar and the United Nations Office of Counter-Terrorism (UNOCT), held in Doha, discussed strategic priorities and collaboration for effective United Nations support to Member States on counter-terrorism.

The dialogue took stock of key achievements and impact of policy, coordination and capacity-building work supported by the State of Qatar, and discussed strategic priorities for the coming year for effective United Nations counter-terrorism support to Member States.

The two sides reaffirmed their strong partnership and discussed opportunities for further collaboration. The State of Qatar is the second largest contributor to the United Nations Trust Fund for Counter-Terrorism out of a total 35 other donors.

Sheikha Alya Ahmed bin Saif Al-Thani, Permanent Representative of State of Qatar to United Nations, opened the dialogue. It was chaired by Under-Secretary-General for Counter-Terrorism, Vladimir Voronkov; and Director of the Department of International Cooperation and Chairman of the National Counter-Terrorism Committee, Ministry of Interior,  Maj. Gen. Abdulaziz Abdullah Al Ansari.

Sheikha Alya Al-Thani welcomed the participants in the important dialogue, expressing the satisfaction of the Government of State of Qatar with the results achieved so far in the implementation of the contribution agreement between the Qatar government and the UNOCT to support the strategic initiatives of the Office, signed in December 2018.

Maj. General Abdulaziz Abdullah Al Ansari reviewed the achievements made in the fight against terrorism since the signing of the agreement between the State of Qatar and the United Nations Office of Counter terrorism.

He stated that the State of Qatar has always cooperated with United Nations bodies in matters of combating terrorism and is striving tirelessly to combat terrorism in all its forms, with the aim of deepening cooperation, expanding existing programs and undertaking new initiatives with the United Nations Office of Counter-Terrorism.

He noted that the results of this cooperation between the State of Qatar and the UNOCT can be seen in the financial contributions made in 2019, which allowed the UN Office to carry out its policy, coordination and capacity-building tasks.

He added that this cooperation has focused on supporting victims of terrorism and implementing many global capacity building programs, and programs that deal with combating terrorism in aviation security using advance passenger information and a common passenger name record. He also stressed the importance of adopting innovative approaches and using new and emerging technologies.

Maj. Gen. Al Ansari praised the UN Global Counter-Terrorism Coordination Compact, which was co-financed with the State of Qatar and the Republic of Korea in 2020, and has gained increasing recognition and benefited from the strong support of the United Nations system and member states.

In this context, he referred to the launch of the ‘Global Program on Security of Major Sporting Events, and Promotion of Sport and Its Values as a Tool to Prevent Violent Extremism’ by the State of Qatar in partnership with the United Nations, indicating that the 3-year program aims to enhance the protection of major sporting events through international cooperation and a sustainable security approach to combating violent extremism that causes terrorism.

He pointed to the progress made by the ‘International Hub on Behavioural Insights to Counter Terrorism’, especially in holding virtual conferences, despite the challenges posed by the COVID-19 pandemic.

He explained that the launch of the center demonstrated the strong partnership between the United Nations and the State of Qatar in combating terrorism, stressing the importance of the center in providing innovative solutions to support member states in the fight against terrorism.

His Excellency added that the State of Qatar is fully committed to the balanced implementation of the United Nations strategy with its four pillars, international treaties and relevant United Nations resolutions. He indicated that the State of Qatar had taken effective steps at the national and international levels, and had made effective legislative changes and updates to the national systems related to combating terrorism and money laundering, including capacity building and national cooperation.

For his part, Under-Secretary-General for Counter-Terrorism Vladimir Voronkov expressed his deep gratitude to the State of Qatar for its support for the work of the UNOCT

He reviewed the achievements made the past year, stressing that many of them could not have been achieved without the generous support of the State of Qatar.

He stated that the past year witnessed the growth of the Global Counter-Terrorism Coordination Compact, as 43 UN and non-UN entities have joined under its banner, cooperating around the world.

He added that the Compact has proven to be a critical framework for exchanging early warning analysis, providing strategic direction, and coordinating responses. He also pointed to the references and guidance materials provided by the eight working groups of the Counter-Terrorism Agreement addressing some of the most complex counter-terrorism challenges.

The Dialogue also stressed the importance securing major sporting events, and promoting sport and its values as a tool to prevent violent extremism; and preventing violent extremism leading to terrorism, including through innovative use of behavioral insights.

It also emphasized the importance of supporting victims of terrorism; and establishing national interagency coordination mechanisms, or “fusion cells.”

Participants in the Dialogue also discussed the Global Counter-Terrorism Coordination Compact and the broader cooperation between the State of Qatar and the United Nations system to deliver “all-of-UN” support to Member States and other beneficiaries.

Doha, 25 June 2022 THE Embassy of Nepal and the Non-Resident ...
END_OF_DOCUMENT_TOKEN_TO_BE_REPLACED