Oil prices: the good, the bad, and our forecast 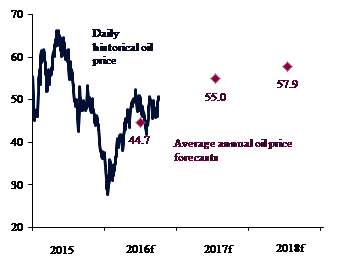 September brought bad news and good news for oil prices. The bad news was the International Energy Agency’s (IEA) warning that weakening oil market fundamentals could delay the rebalancing of the oil market, possibly beyond 2017. But on 28 September, OPEC delivered the good and surprising news that its members have agreed in principle to cut production – the first such agreement since 2008. We believe that the two news items broadly offset each other, and that market rebalancing will continue to progress. As a result, we maintain our forecasts that oil prices will average USD45 per barrel (/b) in 2016, before rising to USD55/b in 2017 and USD58/b in 2018.
The IEA’s assessment that the oil supply glut might persist into 2017 rattled markets. The price of Brent crude oil fell by almost 5% in the two days following the release of the report. The IEA revised down its forecast for oil demand growth by 0.1m barrels per day (b/d) for both 2016 and 2017. This was a result of weakening demand growth from China and India. On the supply side, non-OPEC output continues to decline steeply. US crude oil production has fallen by more than 1.1m b/d since it peaked in April 2015. But this was more than offset by record oil production from OPEC. Production in Kuwait and the UAE hit their highest levels ever; Saudi Arabia’s output is near a record high; Iraqi production continues to grow; and Iran has reached a post-sanctions peak.
However, on 28 September OPEC surprised markets with the news that its members had agreed in principle to limit production to a range between 32.5 and 33.0m b/d. Given that production from OPEC reached 33.5m b/d in August, according to the IEA, the new limits represent a production cut of 0.5-1.0m b/d, if implemented. The news buoyed markets. The Brent crude oil price has crossed the USD50/b barrier and is currently up by more than 10% since the deal was announced.
While the deal could expedite the rebalancing process in the oil market, there is still uncertainty about its exact details. The agreement is not expected to be ratified until the next OPEC meeting on 30 November. So its implementation could be delayed until 2017. There are still issues to be debated and agreed on regarding individual country quotas. This issue is particularly thorny for two reasons. First, both Iraq and Iran still aspire to increase their production. Second, both Libya and Nigeria want their output to pick up following disruptions this year. If these countries are exempt from freezing or reducing their production, other OPEC members will have to cut deeper in order to maintain the production limit. This could prove difficult given the stretched public finances in many OPEC countries.
Until the agreement is ratified and implemented, our baseline view is that OPEC will maintain its production at the near-record high reached in August. This represents a middle ground between the cut implied by the agreement and our previous assessment of continued growth in OPEC’s production.
What do the IEA assessment and OPEC agreement imply for oil prices going forward? We believe that the bearish news from the IEA more or less offset the bullish news from OPEC. As result, we maintain our oil price forecast of USD45/b in 2016. Beyond that, we expect the rebalancing in the oil market to continue, driven mostly by demand growth, notwithstanding moderately higher supply from the world’s major producers. Therefore, we expect oil prices to average USD55/b in 2017 and to continue converging towards USD60/b over the medium term.

20 January 2022 By Ashraf Siddiqui More than 7,000 books of different ...
END_OF_DOCUMENT_TOKEN_TO_BE_REPLACED