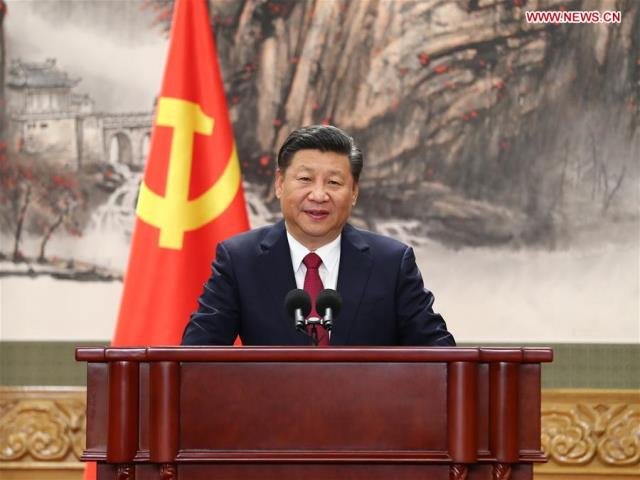 A dark suit, red tie and familiar air of confidence. Xi Jinping’s first public appearance in his second term as helmsman of the world’s largest political party brought back memories from five years ago when he first took over the leadership of the Party.

His ambitious roadmap and grand vision for the future, however, suggests a “new era” has dawned.

Xi described the next five years as a period of “important junctures and signposts.” “In this new context, we must get a new look and, more importantly, make new accomplishments,” said Xi who was elected general secretary of the CPC Central Committee for his second term.

He said the world’s second-largest economy would continue to deepen reform and open itself wider to the world in the next five years.

It will strive for sustainable economic growth, prosperity for all, while working with other nations to “build a global community with a shared future” to make “new and greater contributions to the noble cause of peace and development for all humanity.”

“The CPC, meanwhile, will become a mighty and nationwide force driving China’s development and progress, and rid itself of any virus that erodes the Party’s fabric,” he said.

“We should never entertain the idea of taking a breather or halting our steps,” Xi told 1.3 billion Chinese in the televised address.

That sense of mission and resolve echoed Xi’s words in November 2012. Five years ago when Xi strode into the Great Hall of the People as the Party’s top leader, he had inherited a slowing economy, widening wealth gap and widespread corruption.

To counter these problems, Xi promised a long list of “supply-side structural reform,” including defusing the debt bomb and phasing out obsolete industry.

He has also launched the most thorough anti-corruption campaign in Chinese history, giving sharper teeth to the Party’s discipline agency, and worked to upgrade the Party’s governance of the country.

Xi’s unparalleled determination and resolve paid off. Between 2013 and 2016, China’s GDP expanded by an average annual rate of 7.2 percent, compared to 4 percent growth in developing economies, and just 2.5 percent for the world.

Overwhelming momentum has been gained in the fight against corruption, sweeping reform launched across the military, and China-led projects — such as Belt and Road Initiative — reflected in UN documents.

These “historical changes” have led many to ask the same question. What might China achieve next with Xi at the helm?

The next five years will be a critical time for the CPC, which boasts more than 89 million members, to realize the vision of China’s development that Xi has set out.

China has set 2020 as the target year to finish building a moderately prosperous society in all respects — or Xiaokang — just one year before the CPC celebrates its 100th anniversary.

But Xi’s impact on China’s future may run much further than this. Last week, Xi declared that Chinese socialism had entered a “new era” and spelled out a two-stage development plan for the country to become a “great modern socialist country” by the middle of the century.

China will build on the foundation created by the “moderately prosperous society” with another 15 years of hard work, to ensure that socialist modernization is “basically realized by 2035.”

By the mid-21st century, China will become “a global leader in terms of composite national strength and international influence,” Xi told more than 2,300 applauding delegates.

This means China has set a higher goal for about 30 years from now, and its modernization drive is picking up speed.

It also means for the first time in human history, over 1 billion people will be lifted into modernity at one time.
“With decades of hard work, socialism with Chinese characteristics has entered a new era,” Xi told reporters Wednesday.

“The Chinese people should certainly take pride in the unprecedented progress the nation has made over the past several decades, which has raised living standards in China and in other countries as well,” said Robert Daly, director of the Kissinger Institute on China and the United States at the Woodrow Wilson Center.

“China’s rise fully justifies the announcement of a ‘new era,’ both for China and for the world,” he said.