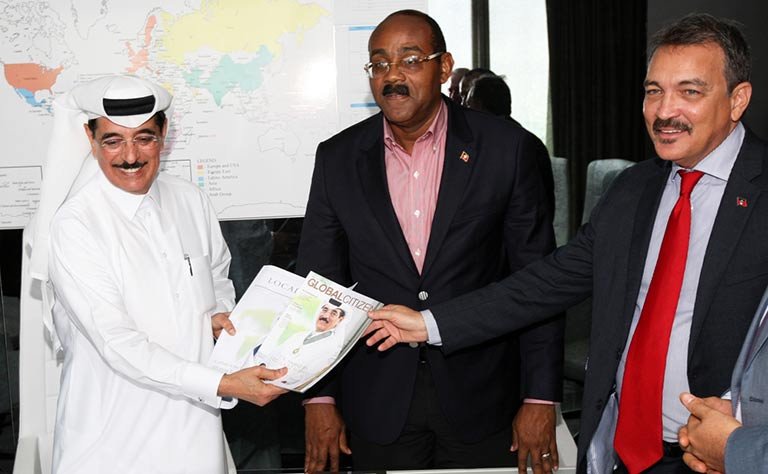 Doha, October 05 (QNA) – Caribbean’s announced today their support for Dr. Hamad bin Abdulaziz Al Kuwari, Qatar’s Candidate to the Post of Director General, UNESCO. Dr. AlKuwari is Former Minister for Culture & Heritage, State of Qatar and presently serving as Adviser on Culture to Emir of Qatar. Announcement of support to Qatar’s candidate was made by Gaston Browne, visiting Prime Minister of Antigua & Barbuda after meeting with Dr. AlKuwari.

Talking to reporters before the meeting, Gaston Browne told that Dominican Republic, the Federation of Saint Kitts and Nevis, the Republic of Trinidad and Tobago and the Republic of Haiti along with rest of the Caribbean Community have given him task to study the candidates for the post of UNESCO Director General and decide which candidate the group will support.

He lauded the wise selection of State of Qatar for choosing Dr. Hamad Al Kuwari as candidate for the key position of international platform. Gaston Browne told that he believes that Qatar’s candidate vision is expected to be a new start for this prestigious organization, that is why the Caribbean nations have decided to support. On bilateral relations between Qatar and his country, the Prime Minister of Antigua and Barbuda said his government is seeking to build strong and deep-rooted relations based on mutual understanding and cooperation in many fields.

Dr Hamad bin Abdulaziz Al Kuwari said on the occasion that he was pleased to have the backing of the Caribbean Community. He said that Qatar’s nomination of one of its sons to the post was because it wanted to deliver a message to the world on the importance of education and culture in establishing peace, it was a message that reached the members of the Caribbean community.

Al Kuwari said that he is aware of the significance of the Caribbean islands, a matter which he highlighted in his candidacy bid. He also realizes that islands along with South American and African nations’ need for backing from UNESCO. Qatar’s candidate maintained that the UNESCO, despite all of its efforts, can still play a bigger role as there were many humanitarian and charitable organizations that look forward to cooperating with the UN organization. This would take place only after the UNESCO succeeds in conveying its message to the world, he added.

Al Kuwari highlighted the role of Qatar in cooperating with UNESCO in a number of initiatives such as “Educate a Child”. This initiative will enable 10 million children to access education by end of 2016, he told.

Dominican Republic, The Federation of Saint Kitts and Nevis, The Republic of Trinidad and Tobago and The Republic of Haiti are all members of the UNESCO Executive Board.

Visiting Prime Minister of Antigua and Barbuda told that necessary procedures will be finalized soon for the appointment of his country’s ambassador to Qatar. He hoped to boost bilateral relations between both the countries mainly in the areas of tourism being his country a tourist destination. He told that his government is working on infrastructure projects and also on legislature to ensure protection of foreign investments. Gaston Brown told that his country is working on the abolition of entry visas between Qatar and Antigua and Barbuda.

20 January 2022 By Ashraf Siddiqui More than 7,000 books of different ...
END_OF_DOCUMENT_TOKEN_TO_BE_REPLACED