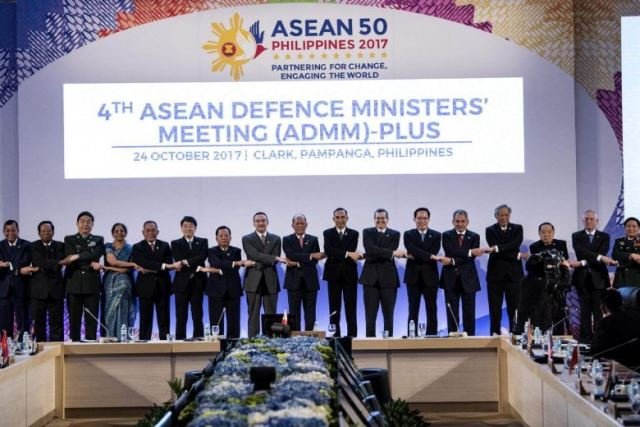 In a chairman’s statement issued on the following day of the 4th ASEAN Defense Ministers’ Meeting-Plus (ADMM-Plus) held on Tuesday, Philippine Defense Secretary Delfin Lorenzana said the 18 ministers agreed that “the emergence of extremist and terrorist groups is not only a problem of few countries but the whole region.”

“The meeting also expressed strong commitment to contribute in eradicating extremist groups and in the de-radicalization efforts to prevent proliferation of such groups,” said Lorenzana, who chaired the 11th ADMM and the 4th ADMM-Plus, as the Philippines is chair of ASEAN this year.

Terrorism and violent extremism were top on the agenda, the statement reads, adding the ministers also exchanged views on maritime security, non-proliferation of nuclear weapons, cyber security and humanitarian assistance and disaster relief.

The ADMM-Plus ministers took off from the joint statement issued by the 10 ASEAN defense ministers on Monday where they agreed “to explore creative approaches and to combat (terrorism and violent extremism), encourage stronger intelligence sharing on movement of terrorists and terrorist financing as well as develop and enhance collaboration with civil society and other institutions to promote moderation and tolerance as an integral component of a comprehensive approach in combatting terrorism and extremism.”

On maritime security, Lorenzana said the ministers are also committed to promoting peace, and ensuring security and stability in the region, stressing the need to peacefully resolve the sea disputes.

On the security situation in the Korean Peninsula, Lorenzana said the ministers expressed concerns on the escalation of tension in that region and called for peaceful conflict resolution through diplomatic means.

“Also discussed during the meeting is the situation in Myanmar’s State of Rakhine and the implication to regional stability of the migration of people thereat to neighboring countries (especially) in the Southeast Asian states,” Lorenzana said.

Moreover, due to the growing complexity of security challenges buffeting the region, Lorenzana said the ministers moved to make the ADMM-Plus meeting yearly, instead of biennially or every two years.

Doha, 25 June 2022 THE Embassy of Nepal and the Non-Resident ...
END_OF_DOCUMENT_TOKEN_TO_BE_REPLACED