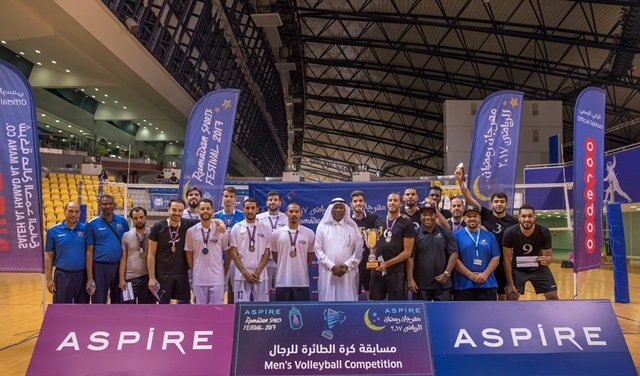 Organised as part of Aspire Zone Foundation’s (AZF) Ramadan Sports Festival (RSF), the men’s and ladies’ volleyball tournaments drew to a close after several days of exciting competitions, held in the Aspire Dome and the Ladies Sports Hall in Aspire Zone.

Team Eagles secured the top spot at the men’s volleyball tournament after winning their match against Team Um Gwalinia in all three sets, leaving the latter in second place. Team International trailed in third place after another stunning win in all three sets against Team Blue Door. Abdullah Aman Al Khater, Events Manager at AZF, handed the awards to the top three winners.

Meanwhile in the Ladies Sports Hall, Team Aktor won the tournament by the skin of their teeth after a tough 2-1 win against Team JA1 Lady Eagles. Al Anoud Al Misnad, a member of the RSF organising committee at AZF, presented the awards to the top two teams.

Separately, the first matches of the RSF’s football tournament have successfully kicked off on the outdoor warm-up track in Aspire Zone. The tournament features 16 teams and will continue until 14 June.

Furthermore, the RSF’s junior futsal tournament for teenagers between the ages 14-16, and the men’s basketball tournaments will start next Saturday in Aspire Dome.

The RSF is an annual sporting event that runs for two weeks. Over 1,300 members from the local community are set to participate in 11 sports tournaments taking place across Aspire Zone’s world-class sporting facilities. This year’s festival is sponsored by Ooredoo and Saleh Al Hamad Al Mana Co.

The festival is an excellent example of the year-round programme of activities hosted by AZF designed to cater to all members of the community.

Aspire Zone has become one of the most popular destinations for Qatar’s residents to take part in sporting activity as well as enjoy a wide range of cultural activities.