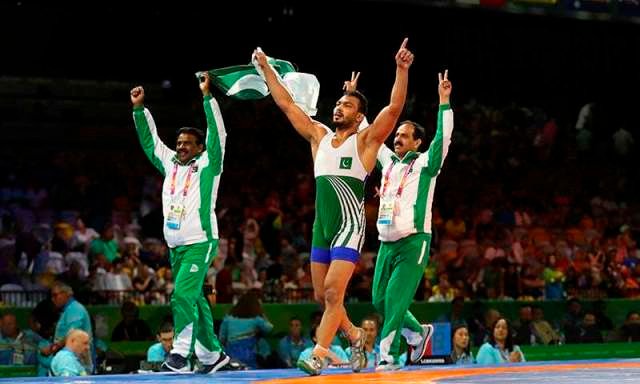 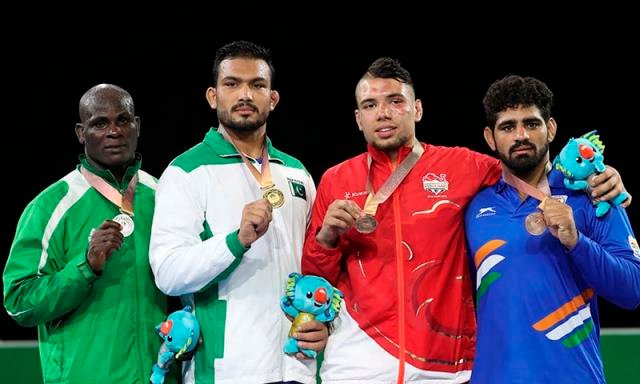 Pakistani wrestler Muhammad Inam won a gold medal for Pakistan on Saturday, in the final of the Men’s Freestyle 86kg Gold Medal event at the Commonwealth Games in Gold Coast, Australia.

Taking place at Carrara Arena, in the last event for Pakistan, the 86kg-wrestler Inam in his final fight thrashed Nigeria’s Bibo by 3:0.

In the first period of the fight, 29-year-old Inam won one technical point while Bibo failed to score any point. In the second period, Inam secured 2, 2, and 1 technical points to secure five points and subsequently finished with six points against Bibo’s nil.

Having secured six technical points, Inam was awarded three classification points and won the fight with 3:0 to win the first gold medal for Pakistan.

Earlier, in the semifinal of the event, Inam defeated Canadian Alexander Moore in style after securing four technical points against Moore’s six. He was given Victory by Fall and thus, qualified for the final of the event.

In the 1/4 final, Inam dominated over Indian Somveer as he secured 10 points in the first period and did not let Somveer score a single technical point to win the fight, as he was given victory by Technical Superiority.

Inam in the 1/8 final of the same event defeated Australian Jayden Lawrence by 4:1. In the first period of the fight Inam secured nine technical points against Lawrence’s four points while in the second period Inam secured five points to end with 14 technical points against Lawrence’s four, winning four classification points to clinch the fight 4:1.

Pakistan on their last day at the games secured one gold and one bronze medal to finally take their tally to five in total where the wrestlers won four and weightlifter won one.

The spokesperson for the Pakistan Sports Board announced that gold medalist Muhammad Inam and bronze medalist Tayyab Raza will be given prizes of Rs5 million and Rs1m respectively for bringing home the accolades.