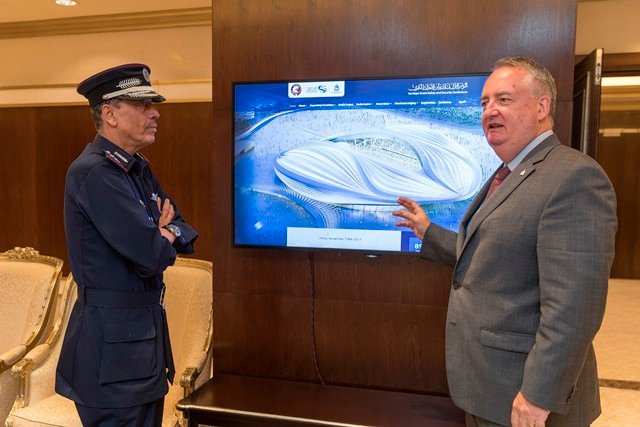 Capt. Falah Al-Dousari said that the project is the successful result of cooperation between the State of Qatar and the International Criminal Police Organization (Interpol) for a period of ten years. It was signed in 2012 and extends until 2022. The aim of the Stadia project is to provide a base International knowledge of best practices in hosting major sporting events, or major events in general, in terms of the mechanism of securing and ways of dealing with them, as well as to be the legacy of those countries that did not host any major sporting events in the past, so that they have the knowledge and mechanisms of how to secure these events. He stressed that this legacy is inherited by the State of Qatar with the International Criminal Police Organization to all the 190 Member states.

He said, ‘ This website is specialized to the first conference to secure major events, which will be held in cooperation between the State of Qatar represented by the Supreme Committee for Delivery & Legacy and Interpol in November. This site introduces the INTERPOL and SC and the objectives of the conference to be held in Qatar.  He pointed out that the conference is part of the work plan of the large Stadia project, which includes many teams of experts and events, including workshops, conferences and training programs.

“This conference is a historic occasion for both Qatar and INTERPOL,” said Morris Tim. “I think it will give a very high look to the 2022 World Cup, noting that the conference activities will increase opportunities for fans from around the world to participate in the most exciting event in the world at all.

“I do not think learning and knowledge will stop at the end of the World Cup, but what is being provided is the way for the law enforcement community. He added that countries will exchange experiences and expertise and contribute to the security of major events through this conference. He hopes that all INTERPOL’s 190 member states will participate in the conference, to bring representatives from around the world to share experiences.