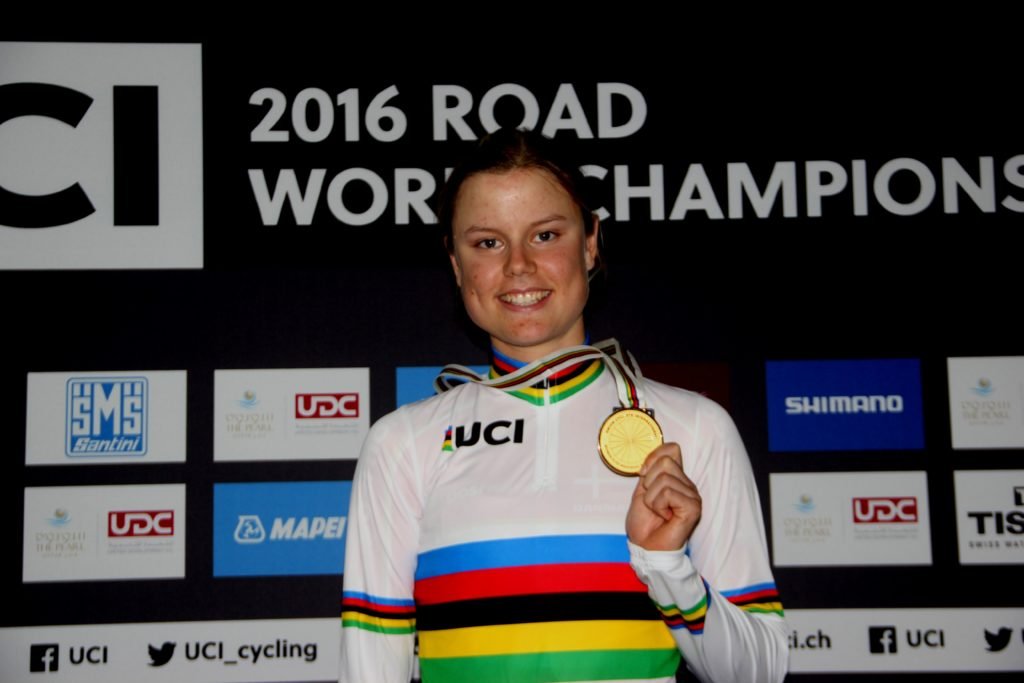 Dideriksen narrowly beat the Netherlands’ top contender, Kirsten Wild, by half a wheel’s breadth at the end of a drawn-out bunch sprint. Finland’s Lotta Lepisto claimed the bronze, with 2015 World Champion Elizabeth Deignan in fourth for Great Britain.

Twice a Junior Road Race World Champion, in 2013 and 2014, Dideriksen has now repeated her past successes in dramatic style at senior level after the 20-year-old forced her way onto Wild’s back wheel when the leading peloton roared into the finishing straight of the 134 kilometre race.
Then with one last driving acceleration, the former Danish national champion soared past Wild to claim her country’s first ever elite Women’s Road Race title.
“I dreamed of this. Winning here is a surprise for me too.” Dideriksen, 25th last year in her first Elite Womens’ Road Race in Richmond’s World Championships, said afterwards.

“But today I had such good teammates, who even brought me back after a crash and kept on bringing me bottles so I have to say a huge thanks to them.”
“I chose Wild’s wheel in the sprint. I hoped for a top 10 when I came here. I’m 20 years old and it was a goal for the future to win the Worlds. But I felt pretty great the entire race. I tried to stay calm and at the front of the peloton and not waste too much energy, and I’ve beat a top-class sprinter so I’m so happy.”

“I am actually pretty disappointed. We rode a very good race, we had it under control,” Wild said. ”I felt that it was early to go for a srpint, but I could not wait any longer. Diderksen is a very good rider, who came off my wheel very fast. It was my chance, but you cannot turn the clock back.”
The seven final 15.2 kilometre laps on the Pearl Island in Doha saw the first of the decisive late moves begin thanks to recently crowned World Time Trial Champion Amber Neben. Neben’s courageous lone move allowed the US star to gain up to 50 seconds with nearly two laps to go as Australia and Britain chased behind.

As Neben’s strength slowly ebbed away on the completely flat course, the American still led as the peloton crossed the finish line for the second last time, but only by the barest of margins. Teams keen not to see the widely predicted bunch sprint materialize immediately began firing their riders up the road, and Britain’s Dani King briefly caused the peloton to shatter with her prolonged surge away from the front of the pack.

However, what had been a fast but fairly straightforward race until that point meant sprinters’ teams like Germany and the Netherlands had plenty of firepower left and indeed, the Netherlands had no less than six riders protecting Kirsten Wild in the closing kilometres. A brief incursion by Italy into the peloton’s front ranks left Wild with only three team-mates with two kilometres. But as the bunch surged round the long ’S’ bend leading to the finish, Wild, set to be led out by former multiple World Champion Marianne Vos, was still exactly where she needed to be to go for the win.

However, Dideriksen’s late, perfectly calculated move saw the Danish rider shoot past Wild in the last 25 metres to claim the gold medal, even as Finland’s Lepisto made a late charge for the line on the far side of the finish that earned her the bronze.

“I had a hard time staying on Kirsten Wild’s wheel because everybody wanted it. Everybody knew she was the sprinter to beat, but coming past her was very hard,” Dideriksen added.

“I still have a lot of dreams for the future and I can still improve as a sprinter. My dream is to take an Olympic medal.”
With just one race remaining, the World Championships nations ranking continues to be led by Germany, with 970 points nearly 300 points clear of the USA, their closest pursuers, with 674 points. Denmark, meanwhile, have moved into third place thanks to Dideriksen’s victory with 607 points, and the Netherland are now in fourth place, with 597.

Sunday is the last day of the 2016 Road World Championships, with the elite men’s road race the last event to be held and one final rainbow jersey to be awarded. Don’t miss it!