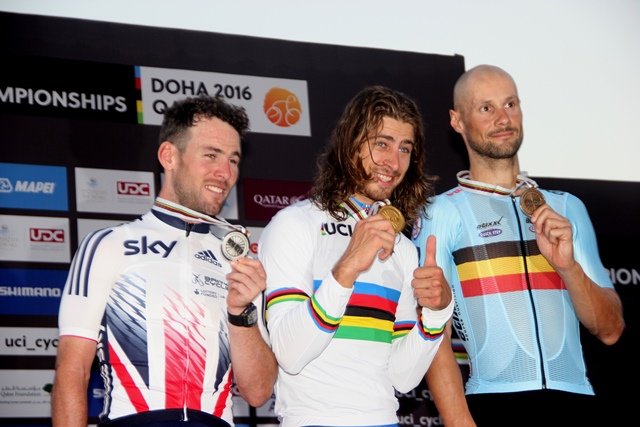 Peter Sagan will wear the rainbow jersey for at least one more year. The 2015 Champion defended his title in style when he beat Mark Cavendish and Tom Boonen in a sprint of Champions at the UCI Road World Championships Doha 2016. Cavendish, the 2011 winner, grabbed silver and Boonen, the 2005 World Champion, took bronze. Shaikh Jawan bin Hamad bin Khalifa AlThani graced the historical event and decorated the World Champion with the winning Gold Medal.

Sagan took advantage of the Belgians, who tore the race into pieces at a long cross wind stretch in the desert on the way back to Doha. The Slovak was one of the last riders to make it in the first echelon in the decisive battle after about 75 kilometres into the race.
“I’m very happy,” Sagan said, “Because at the decisive point I was the last one to make it into the first group. Then I thought for me, it was just going to be the sprint. I was really lucky because (Giacomo) Nizzolo did not close the gap at the fence. If he would have done that we surely would have crashed because I would not have braked.”

Riders were nervous at Aspire Zone, where they set off for about 150 kilometres through the desert and more than 100 kilometres over seven 15.2 kilometre laps on The Pearl circuit. They all looked at the flags, knowing that the northwest wind would be key.
“It’s a great chance for sprinters and the biggest challenge is going to be the wind rather than the heat. The race is going to be split into pieces quite soon,” Lithuanian Ramūnas Navardauskas said. Although not quite so soon, his prophecy was fulfilled.

Heading out of Doha to turning point Abu Yazoul, the peloton faced a head wind. That did not seem to bother Daniel Teklehaimanot very much, as he was the first to attack when the flag was dropped for the official start. The Eritrean was countered, but his compatriot Natnael Berhane immediately made another attempt. Six riders joined and the peloton gave them the green light.
Seven man adventure

Natnael Berhane, Rayan Stiven Ramirez (Colombia), Sergiy Lagkuti (Ukraine), Ryan Roth (Canada), Nick Dougal (South-Africa), Rene Corrella (Mexico) and Anas Ait Al Abdia (Morocco) took off for a joint adventure in the desert. Riding against the wind they cooperated well and reaching the turning point they were a good ten minutes ahead of the bunch, which was led by Great Britain, Australia and Norway. Mark Cavendish’s Belarussian Dimension Data team mate Kanstantin Siutsou took long turns in front of the cruising bunch. It was silence before the storm.

Crosswind battle
At the turning point Rene Corrella gave way in the breakaway. The Mexican was cooked and soon swallowed by the bunch. That was in a nervous position battle with the cross wind section back to Doha in sight. Great Britain, Italy and Belgium led the peloton when they rounded to corner and the battle was on. The Belgians strung the pack into a long line and tear the peloton into pieces with a ferocious pace on the not too wide road down south.
Dutchman Tom Dumoulin had a flat at the worst possible moment and saw the echelons in front of him disappear in the desert. While the Belgians tortured the field, victims dropped in crashes, with mechanicals and just because they could not keep up with the pace. Within half an hour the peloton was broken into three main groups, with six Belgians, three Italians and three Norwegians in the front group.
Belgium in driver’s seat

Germany and France were the main victims. Both André Greipel and Marcel Kittel had not been able to get a ticket for the first echelon. French sprinters Arnaud Démare and Nacer Bouhanni also missed out at the decisive moment. World Champion Peter Sagan and teammate Michal Kolar did make it in the first echelon, as had Dutch Niki Terpstra with fellow compatriot Tom Leezer. Mark Cavendish had company from Adam Blyth, but both the Dutch and the British teams were bruised and battered after the Belgian strike. Australia had Michael Mathews and Matthew Hayman in the first group, but their sprinting prospect Caleb Ewan missed out. Norway’s sprinter Alexandr Kristoff survived in the happy company of teammates Truls Korsaeth and Edvald Boasson Hagen and Italy still had Jacopo Guarnieri, Elia Viviani and Giacomo Nizzolo in front.

Belgium had Tom Boonen, Greg Van Avermaet, Jens Keukeleire, Oliver Naessen, Jasper Stuyven and Jurgen Roelandts among the frontrunners. The early breakaway had been overrun by the Belgian steamroller, but Berhane, Roth, Dougall and Anas Ait Al Abdia managed to keep up with the first echelon and eventually finish with the leading group.
Frustrated Germans

While the confident Belgians made pace in the first echelon, occasionally helped by the Italians, the second and third echelons sought ways to get back into contention. Entering The Pearl circuit, the second echelon was one minute behind, with the third group even further back. In the second group Andre Greipel and Marcel Kittel tried to organise a chase, but nobody seemed willing to cooperate and the two Belgians in that group tried everything they could to disturb their organisation. The gap only increased to two and eventually three minutes. Greipel tried to attack in frustration, but the second group knew that their race was lost. With three laps to go Kittel parked his bike at the side of the road. It was up to the Belgians to cash in.

Leezer attempt
In the penultimate lap Keukeleire gave way in the front group and in the final lap Bennati and Stuyven also had to let the first group go. With five kilometres to go Niki Terpstra was the first to attack, but when he looked back he saw the golden bike of Olympic Champion Van Avermaet. Everyone looked at each other and no one seemed to have enough energy left to attack, until Leezer seized the moment with two kilometres to go. The Dutchman got a gap and cleared the red flag of the last kilometre with a five second gap. He seemed to have a shot at the title, but when Van Avermaet took the lead in service of Boonen’s sprint.

At about 300 metres from the line, they caught Leezer and Boonen was the first to go full pace on the final straight, but the former World Champion was not able to hold the first position, when the 2015 winner jumped from Nizzolo’s wheel to cross the line first. Cavendish eventually also managed to edge out Boonen on the other side of the road.