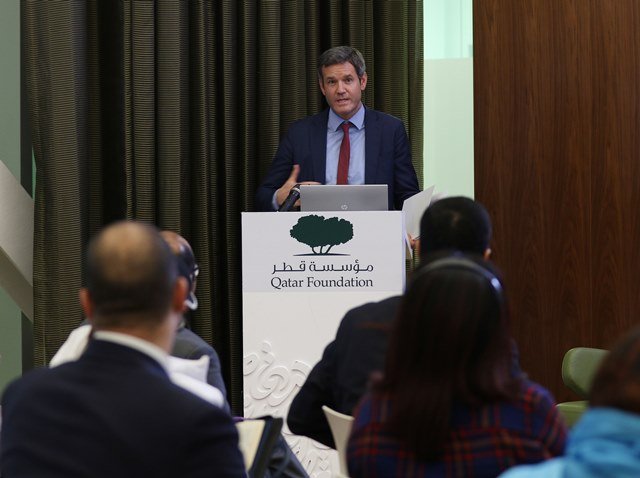 The event, held at Qatar Foundation Headquarters in Education City on 26th October, was designed to evaluate the increasing effects and growing challenges of dementia on society in Qatar, and to raise awareness among the general public of this global problem. The programme’s activities included a series of talks by leading world experts in the study and care of dementia patients. Those in attendance heard first-hand accounts of caregivers who shared their perspectives and personal experiences on caring for patients with dementia.

WISH, a member of Qatar Foundation for Education, Science and Community Development (QF), is strongly committed to highlighting the growing problem of dementia as a global public health challenge. In 2015, WISH published a report on dementia, entitled ‘A Call to Action’, inspired by the need for global alignment to find national and international solutions. This alignment found expression in the World Health Organisation’s (WHO) Global Dementia Observatory, a process in which Qatar plays a key role. Since that time, WISH has provided a range of support to Qatar’s health leaders in developing policy and provision of care.

Egbert Schillings, CEO, WISH said “Dementia is often overlooked amid more immediate health concerns. However, one out of three people die with dementia and all of us at some point will have the experience of a loved one being diagnosed with dementia. That is why we were delighted to co-host this community event with HMC, so as to give people a 360 degree view of dementia. We had a clinical perspective from both geriatrics and psychiatry, an ethical view thanks to the Qatar Islamic Cultural Center, and that of a caregiver. Everyone left deeply touched as well as enlightened. WISH is committed to helping advance the dementia agenda, both at a policy level and within the community.”

Dr Hanadi Alhamad, Chairperson, HMC Geriatrics Department and Focal Point for Elderly in Qatar said: “Qatar was among three countries, including Tunisia and Jordan, to be nominated to be part of the global dementia observatory. Since we accepted to be part of the WHO, there is a clear program we now follow. An awareness campaign is mandatory and will help fight stigmatization. We encourage the use of words like ‘memory loss’ or ‘memory impairment’ instead of dementia as well as educating family members of patients on this issue.”

Dementia is an overall term that describes a condition when the brain is damaged by diseases, such as Alzheimer’s or a series of strokes. Dementia includes a wide range of symptoms: deterioration in memory, thinking skills, and other symptoms severe enough to reduce a person’s ability to perform everyday activities.

Dementia is one of the major causes of disability and dependency among older people worldwide; however, it is not a normal part of ageing. Dementia has physical, psychological, social and economic impact on caregivers, families and society which adds to the complexity of developing effective services.