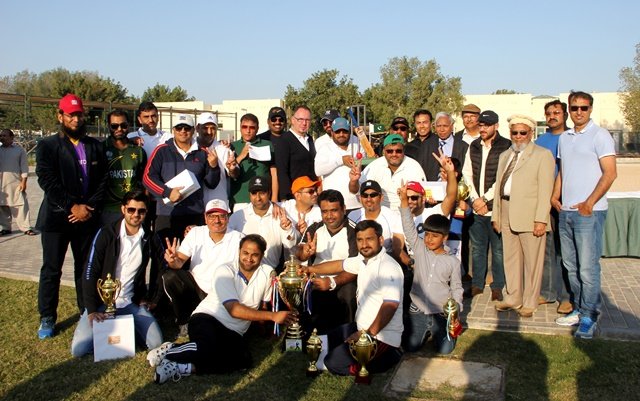 In reply ‘Gilgit Elevators’ could not handle the pressure and bowled out for 99 runs in 18 overs.

Final match was supervised by most senior and experienced cricketers in community Adnan Sheikh and Amir Khan.

Sohni Dharti PCL is an annual cricket tournament organized for Pakistani community members living in Alkhor community serving in Ras Gas and QatarGas. Six teams on the pattern of PSL played last year under Pakistan Cricket Board participated in the 5th Annual Tournament.

Tournament lasted for the 4 months starting from October 1st 2016 and final played on 7th January 2017. Each team played 10 matches in league round, facing twice to all teams. League matches were of 15 overs, play off and finals were of 20 overs match. The top four teams based on points table Gilgit Elevators, Quetta Gladiators, Lahore Qalandars and Peshawar Zalmi qualified for Play- off matches. The top two teams of play off matches Gilgit Elevators and Lahore Qalandars played final.

Prizes were presented to all participating team players including 35 ‘Man of the Match’ awards. Best Batsman award was given to Amir Khan, ‘Best Bowler’ Adnan Sheikh and ‘Best All-Rounder’ Muhammad Qasim picked on their performance.

Winning and Runner-Up teams were presented trophies and gifts. Three players from each team were given prizes for their commitment and interest during the matches of their respective teams. Individual trophies were also awarded to the winner and runner up captains. Naveed Anwar, Captain of ‘Karachi Kings’ who were winner of PCL 2016 handed over the specially designed rolling trophy to winning captain of 2017 Shahid Nadeem of ‘Lahore Qalandars’.

Klaus Teil appreciated Sohni Dharti on successful organizing the tournament and he assured of his support and cooperation in future.

Large number of Pakistani community members and other nationals, their families enjoyed and witnessed the final match. They supported whole heartedly their favourite players. On the occasion, a number of food stalls mainly Pakistani traditional dishes including biryani, Kabab, Pakoras, Samosas, Chat and different types of teas including favorite Kashmiri chai and Karak were arranged.

Special Rolling Trophy is designed and hand made by Zaheer Khan.

Rana Anwar Ali, Chairman Sohni Dharti in his concluding speech highlighted the basic concept of Cricket Tournament which is to provide healthy environment and to enhance the team work and mutual relationship between the community members. He specially paid his gratitude to the guests and families of the players and organizers for their support.