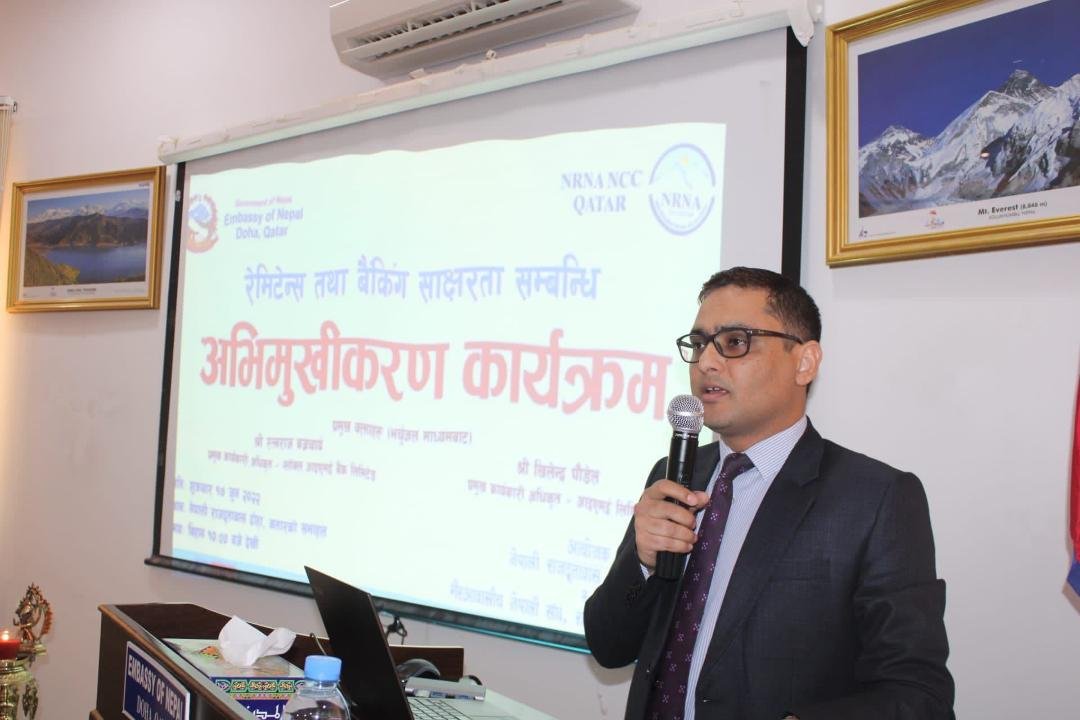 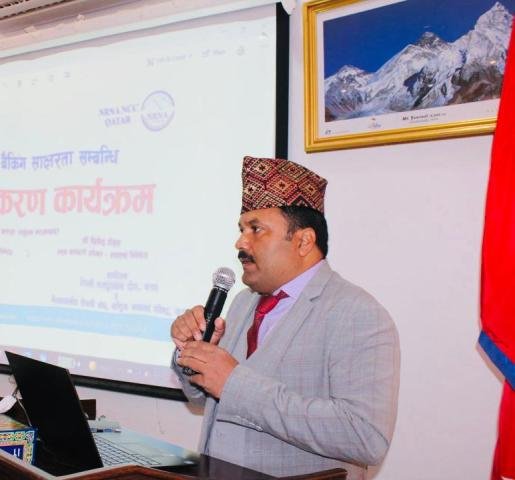 THE Embassy of Nepal and the Non-Resident Nepali Association (NRNA) Qatar jointly organised an awareness program on the topic “Remittances and
Financial Literacy” for the community members at the embassy premises.

The event was broadcast live for community members at large to benefit from it. The program was intended to impart basic knowledge of the benefits of using official and formal banking channels to remit money back home.

Welcoming the participants to the program, Mohammad Muktda Musalman, President of NRNA Qatar, shed light on the objective of the program.  He encouraged each and every member of Nepali community working in Qatar to contribute to the national economy by channeling their remittances through formal official banking system.

In his address, Bajracharya highlighted the importance of remittance in Nepal’s economy, especially in reinforcing foreign reserves. He pointed out that remittances transmitted informally or unofficially might promote informal economy and illegal activities in the country.

Emphasizing the productive utilization of hard-earned remittances, Bajracharya informed the audience of the various incentives introduced by Government of Nepal to promote remittance through formal banking channels.

Khilendra Paudel stressed that remitting money through formal banking channels is the main way of getting registered in the formal economy of the country.
He said this helps in attesting the source of income and there is no risk of losing money in between. Sending money unofficially or informally is illegal and the sender runs a high risk of being cheated and remaining unpaid.

He highlighted that the Government of Nepal has arranged for 1 percent additional interest for people who remit their income through formal channels. Similarly, the Government has also announced an IPO quota for people working abroad.

Hemraj Subedi of Global IME Bank Limited, and Dipendra Paudel, of IME Limited, made a presentation in the program highlighting the need to for remit money through formal channels.

They also touched upon the incentives being provided by the Government of Nepal to facilitate the flow of remittances. There was a question answer session in which experts from Kathmandu answered queries from the participating expatriates in the online live session.

Charge D’ Affaires at the Embassy of Nepal in Doha, Lakshuman Khanal thanked the experts as well as the participants for their valuable contribution and active participation in the program.

He stressed that remitting money through the formal banking channels is the right and legal thing to do.

Khanal shared there were unconfirmed reports that some people send money informally and unofficially sometimes due to lack of awareness of the process and at others due to the promised higher exchange rates. He advised that this is risky for the individual, for their families as well as to the society and the country.

Shedding light on some of the incentives the Government has announced for encouraging remittance through formal channels, he requested the participants to spread the message of the program to each and every member of Nepali community