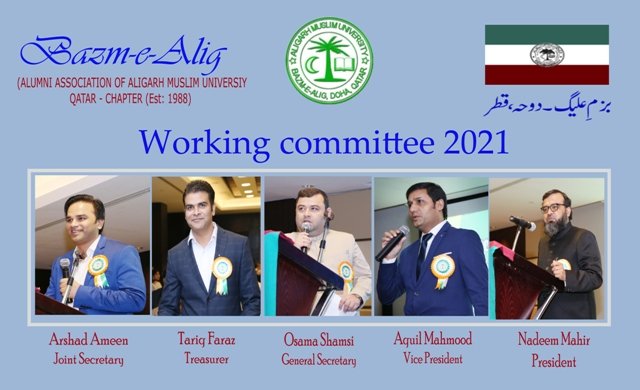 Bazm-e-Alig, alumni association of Aligarh Muslim University in Qatar announced the extension of tenure for the current executive committee till end of year 2021.

Due to current pandemic situation, On 12th February 2021, Election Officer and Advisory members conducted Virtual Meeting. Osama Shamsi, General Secretary welcomed the participants. Present in virtual meeting were Nadeem Mahir, President and Aqil Mahmood, Vice President of the Qatar Chapter of old boys. They reviewed the activities organized during the year 2019-2020.  The Advisory Board after evaluation of the election process asked the Committee Officials to continue till end of the year 2021, which was confirmed by the executive committee.  However, Election Advisory Committee has asked Qatar based alumni members to offer their services for the positions of Executive Committee for the year 2021.

Following are the Bazm e Alig, Qatar Chapter Executive Committee Members who were elected for the year 2019 and 2020 :

President, Bazm-e-Alig, Qatar Chapter, Nadeem Mahir, renowned literary personality in Urdu literary world, poet, speaker thanked his committee members of their services to the Indian community in Qatar and congratulated them for having entrusted for another year to serve for the betterment of alumni and good name for their great educational institution and the great founder Sir Syed Ahmad Khan.