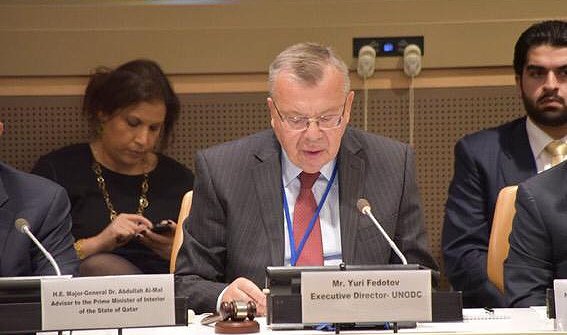 In the framework of the Global Program on Doha Declaration supported by the State of Qatar, a high-level event was held yesterday at United Nations office in New York City with a panel from UNESCO, UN Youth Envoy, Qatar Mission at UN, United Nations Office on Drug and Crime.

The meeting was aimed at promoting a culture of lawfulness in the education systems to make the world safer from crime.

Ambassador Alya Ahmed Saif Al Thani, the Permanent Representative of Qatar at United Nations, welcomed the guests and delegates and moderated the discussion. Secretary-General of Ministry of Foreign Affairs-Qatar, Dr. Ahmed bin Hassan Al Hammadi said that the Education for Justice initiative inspires children and youth in the spirit of innovation in order to create a society free of drugs, crime and violent extremism.

Yury Fedotov, Executive Director of UNODC thanked the State of Qatar for its generous support for the Global Program of Doha Declaration and stressed that the education for all children & youth is fundamental to the prevention of crime and corruption and to the promotion of a culture of lawfulness that supports the rule of law and human rights.

Marie Paule Roudil, the Director of UNESCO Liaison Office New York and UNESCO Representative said “I am particularly proud of the partnership between UNESCO – the UN agency mandated to lead on education – and sister agency UNODC to foster a culture that respects rule of law.

Flagging Qatar’s support for education and the rule of law, HE Maj. Gen. Abdullah Al-Mal, Advisor to HE the Minister of Interior highlighted how the Doha Declaration has contributed significantly in directing international efforts towards building just and humane criminal justice systems. Major General who is also the chairman of Doha Declaration Follow-up Committee thanked the United Nations Office on Drugs and Crime (UNODC) and UNESCO for their efforts to strengthen criminal and human rights systems.

He added that the period from 2015 to 2018 has been marked by significant achievements of the Doha Declaration on Education for Justice, noting that the latest statistics of the United Nations indicated that the number of countries benefiting from the projects of the Global Program for the Doha Declaration since the adoption of the Declaration in 2015 reached more than 166 countries In which 4,862 persons benefited from the awareness and education activities and its various initiatives along with 3,467 beneficiaries in the technical support area.

“Qatar’s support for the Doha Declaration in partnership with the United Nations is part of its ongoing efforts to assist States, particularly developing countries, to address organized crime, to build effective, fair, humane and accountable criminal justice systems, to consolidate the rule of law and to achieve sustainable development, And to make a positive impact on international peace and security,” he added.

UN Secretary-General’s Envoy on Youth Jayathma Wickramanayake highlighted the importance of young people in preventing crime while basketball legend & humanitarian, Dikembe Mutombo, CEO & President of The Dikembe Mutombo Foundation highlihted the Education for Justice resources and added that through support from Qatar, a series of creative tools have been developed to promote education on crime prevention and criminal justice.