Why Did OPEC Extend its Output Cuts? QNB 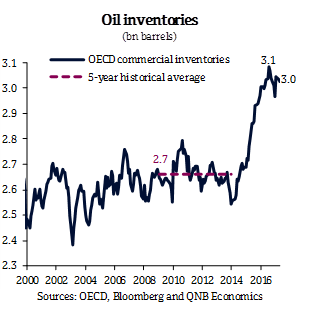 OPEC, along with a number of other non-OPEC major producers, recently extended their 1.8m barrels per day (b/d) output cut agreement from end-June 2017 until March 2018. We examine the reasons and strategy behind the decision to extend the output cuts. We argue that OPEC is mainly concerned with keeping the futures curve flat as it makes it new production unprofitable for high-cost producers as they can no longer sell oil at the higher future prices.

The initial OPEC agreement flattened the futures curve to the detriment of higher-cost producers. Before OPEC announced its output cut agreement at the end of November 2016, the futures curve was steep—the price of oil in 24 months was around USD5.4/b higher than spot prices. This made it easier for US shale oil producers to sell oil at higher future prices at the same time as investing in new production. US crude production ramped up from 8.5m b/d in October 2016 to 9.3m b/d in May. Following OPEC’s agreement at the end of 2016, the futures curve flattened substantially as the agreement reduced excess supply. By the end of April, the price of oil in 24 months was only USD1.6/b higher than spot prices. The idea was to shift the futures curve to levels below the breakeven price for US shale (around USD55/b), discouraging these producers from investing in additional production.

The OPEC-led agreement to cut production for H1 2017 flattened the futures curve for two main reasons. First, by accelerating the rebalancing of the market from excess supply to under supply, inventories in oil consuming countries should be reduced. Lower inventories means lower storage costs and lower total supply available to the spot market, and to a lesser extent to the future market, which flattens the futures curve.

OPEC has stated its objective to reduce inventories to their five-year historical average (2.7bn barrels) from 3.0bn barrels currently. Second, while it reduced supply today, OPEC also committed itself to growing production in future years to keep prices below the US shale break even level. This should depress future prices, keeping them below spot prices. Therefore, it seems likely that OPEC decided to extend its production cuts to March 2018 to ensure that the futures curve remains flat or even in the hope of pushing future prices below spot prices.

Based on IEA data and taking into account the extension of OPEC’s output cuts, the global oil market will be under supplied by around 900k b/d on average in 2017, which should be sufficient to bring inventories back down to historical levels by March 2018. However, this will not be the end of the story. OPEC, along with the other major producers, will still face a tricky decision whether to extend the cuts.

If they remove the output cuts, they would risk shifting the market back into excess supply, rebuilding inventories, lowering oil prices and steepening the futures curve. Meanwhile, if they extend the cuts further, they would risk losing market share to other producers, such as US shale oil. Overall, OPEC will endeavour to keep oil prices at a level just below the US shale break even price throughout the futures curve.

Doha, 25 June 2022 THE Embassy of Nepal and the Non-Resident ...
END_OF_DOCUMENT_TOKEN_TO_BE_REPLACED