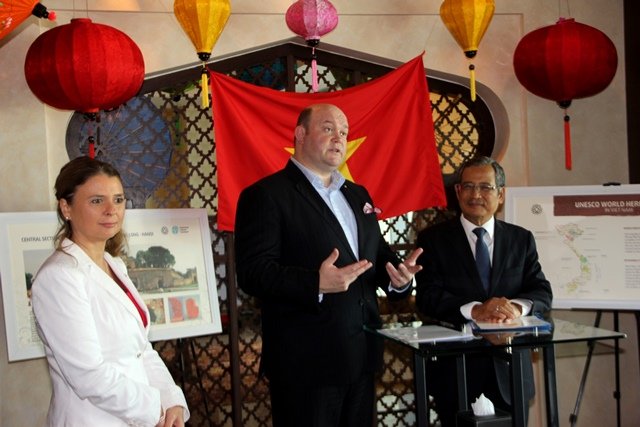 Ambassador Nguyen Hoang of Vietnam has invited tourists and investors from Qatar to Vietnam. Addressing a press conference at the Hotel Shangrila Doha, Vietnam envoy to Qatar assured his country as one of the most safest tourist destination as well as offers 100 % ownership in business to foreign investors.

‘ This is one of our efforts in raising the awareness among Qataris as well as large expatriate community living in Qatar, ambassador announced. He told that Vietnam is an ideal tourist destination highlighted by its cuisine popular in many countries across Asia and Europe. ‘Upcoming event is an important event for our community in Qatar because it is the first time Vietnam’s best traditional dishes served by Vietnamese Chef Vu Van Dang and some of our traditional handicrafts will be presented to the people of Qatar. The opening ceremony will feature a traditional Vietnamese dance. This unique opportunity will allow spectators to sample rarely seen traditional dance techniques of Vietnam,” Ambassador Nguyen Hoang told.

Alex Willats, General Manager, Hotel ShangriLa Doha said on the occasion,’The popularity of Vietnamese cuisine is growing. It is now featured on TV shows all over the world and is widely known as having the most thriving street food scenes in the world. In fact, Forbes Magazine has voted it in the top 10 of street foods throughout the world’.

‘Traditional Vietnamese food is well known for the herbs and fresh vegetables that they use. And this is what helps distinguish it from other culinary scenes within the region. Delicate, flavorful and colorful fresh vegetables are integrated into their dishes.”

Vietnamese envoy paid his special thanks to Emirates Airlines for offering two business class return tickets and a Week-end stay at Hotel Shangrila Dubai and an Economy class ticket to Hanoi, Vietnam. Alex Willats told that Shangri-La Hotel Doha will run a social media contest for people attending the Vietnamese Culture and Cuisine Festival to participate in raffle draw.