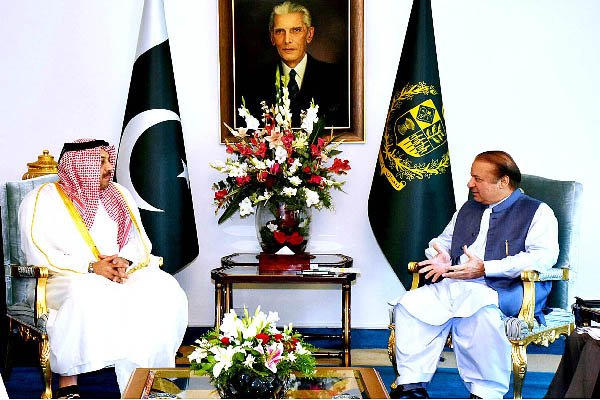 Prime Minister Muhammad Nawaz Sharif on Thursday said Pakistan and Qatar were enjoying strong brotherly relations which would be further strengthened into sustained economic cooperation for the benefits of both the countries.

The Prime Minister was talking to Dr. Khalid bin Mohammad Al Attiyah, Minister of Defence Affairs Qatar, who called on him here at the PM House. He further said that Pakistan, Qatar and Turkey can set up joint ventures for undertaking defence related manufacturing of military equipment.

“Our relationship with Qatar means a lot to us and you can count on Pakistan as your closest ally and brotherly state”, the Prime Minister said.

Dr Khalid bin Mohammad Al Attiyah said that Qatar sees Pakistan as a strategic partner and every effort would be made to make this relationship second to none. He further stated that after concluding the LNG project during the PM’s last visit to Qatar, the relationship between the two brotherly states has grown into a much stronger economic cooperation.

“With the assistance and cooperation of Pakistan, we want to improve our military hardware to be prepared for the uncertain threat of terrorism, prevailing in the region”, the Defence Minister added.

He further said that Qatar would be establishing training academy for countering the unconventional enemy of terrorism and would be seeking the services and expertise of the Pakistani instructors to impart training courses there.

The Defence Minister said that the mutual cooperation between Qatar and Pakistan, led by Prime Minister Muhammad Nawaz Sharif, would see new heights in the times to come.

“We are desirous of buying Super Mushshak and JF-17 Thunder aircraft from Pakistan and also want to set up military cooperation and production of equipments in Qatar with the assistance of Pakistan and Turkey”, the Defence Minister said.

The Defence Minister also extended condolences to the Prime Minister, on his behalf and on behalf of Sheikh Tamim bin Hamad Al Thani the Emir of the State of Qatar, on the loss of precious human lives in the terrorist attack on Police Training Centre Quetta.

He said that the terrorist attack was most condemnable and the government and people of Qatar stand by their Pakistani brethren in this hour of grief and sorrow.

He mentioned that earlier visits of the Emir of Qatar to Pakistan in March 2015, Pakistan’s Prime Minister and Presidents visits to Qatar had proven fruitful to enhance the existing relations including military and defense cooperation between the two countries.

Khawaja Asif said the ‘Pakistan-Qatar Staff Talks’ was an established forum between the two Armed Forces and would help further strengthen the bilateral relations . He said Pakistan was looking for an early posting of Defence Attach’ at the Qatar Embassy Islamabad.

The visiting dignitary acknowledged the scope of cooperation between the two countries and desired to undertake joint ventures in the field of defense industry.

Khawaja Asif invited his Qatari counter-part on the opening of IDEAS 2016 to be held in last week of November 2016.

Defense Minister of Pakistan thanked Khalid Al Attiya for Qatar agreeing to transfer the Sea King aircraft after their disposal from QEAF to Pakistan Navy, and expressed the desire for the continuation of Sea King simulator training to PN,” Associated Press of Pakistan, Official News Agency of Pakistan reported today.