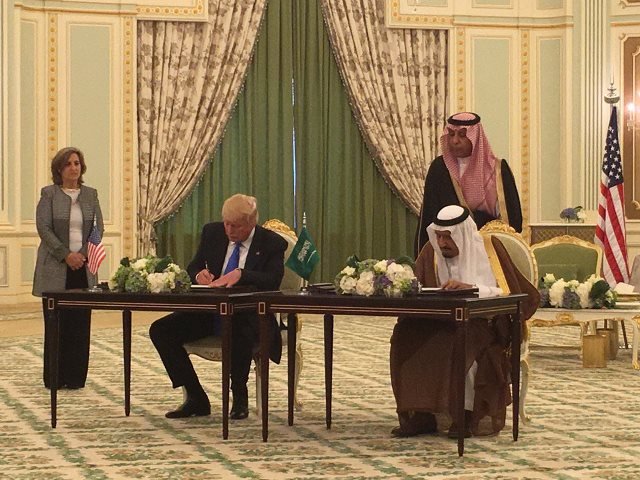 President Trump and King Salman signed a series of agreements Saturday that cement ties between their two countries, including a nearly $110 billion deal to sell U.S. arms to Saudi Arabia.

The deal for defense equipment and services are aimed at helping Saudi Arabia and the Gulf region fend off Iranian threats, bolstering the kingdom’s ability to contribute to counter-terrorism operations and reducing the burden on the U.S. military in the region, said the White House.

Prodding the Saudis and other Muslim countries to play a larger role in combating radical Islam and the threat of Iran is a top priority on Mr. Trump’s first trip abroad as commander in chief.

“This package demonstrates, in the clearest terms possible, the United States’ commitment to our partnership with Saudi Arabia and our Gulf partners, while also expanding opportunities for American companies in the region, and supporting tens of thousands of new jobs in the U.S. defense industrial base,” the White House said in a statement.

The agreements signed included a joint vision statement, defense cooperation agreements for an immediate $110 billion deal and intent for another $350 billion in arms over 10 years.