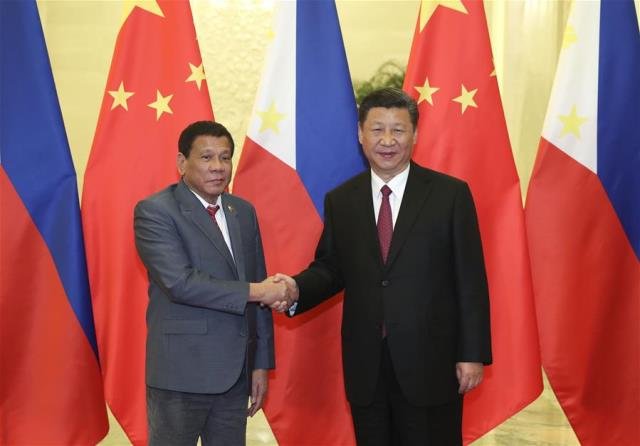 President Xi Jinping on Monday called on China and the Philippines to step up communication on major issues concerning bilateral ties, in order to lead their relations toward healthy and stable development.

In his meeting with Philippine President Rodrigo Duterte, Xi said the Philippines is a friendly neighbor of China and an important partner in Belt and Road cooperation. Friendly cooperation for win-win results is the right track for China-Philippines ties, Xi said, noting that China is willing to work with the Philippines to align their development strategies to benefit people of both countries.

They should seek substantial progress in key cooperation areas as soon as possible, and establish close exchanges and cooperation between legislative bodies and local governments, as well as in such fields as culture, youth, tourism and personnel exchanges.

China will enhance communication and cooperation with ASEAN countries to lift China-ASEAN ties to a new height, Xi said.

President Duterte said the Belt and Road Initiative is conducive to Asian connectivity and economic growth, as well as to the Philippine’s own employment prospects and prosperity. Noting that the two countries have resumed dialogue and consultation, Duterte said the Philippines and China are important trade partners.

He said the Philippines is willing to maintain close contact, expand cooperation and promote cultural and people-to-people exchanges with China, and will work to strengthen cooperation between ASEAN and China.

The two presidents witnessed the signing of a series of cooperation documents in the fields of economy, technology, infrastructure, human resources, energy and press and publications after their meeting.

In a separate meeting with Duterte, Chinese Premier Li Keqiang said friendly ties between China and the Philippines are in the interest of people from both countries.

Li urged the two sides to push forward cooperation in industrial capacity, infrastructure, finance, agriculture and fishery, as well as in people-to-people exchanges and poverty alleviation, so that the progress in China-Philippines ties will not only benefit their own peoples, but also promote regional stability and prosperity.

Li said that the Philippines holds ASEAN’s rotating chair this year, and China will intensify coordination with the Philippines to forge a closer community of shared future with ASEAN countries.

Duterte said that ties between the Philippines and China are currently on the right track. He said the Philippines supports the “Made in China 2025” plan, and welcomes Chinese investment in the country.

Doha, 25 June 2022 THE Embassy of Nepal and the Non-Resident ...
END_OF_DOCUMENT_TOKEN_TO_BE_REPLACED