QP To Postpone Start of Production from New Gas Facilities Until 2025, AlKaabi 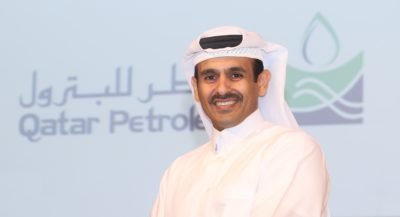 Minister of State for Energy Affairs, State of Qatar, Eng. Saad bin Sherida Al Kaabi, who is also President and CEO of Qatar Petroleum (QP), said that Qatar Petroleum (QP) will postpone the start of production from its new gas facilities until 2025 following a delay in the bidding process.

Talking with Reuters in a video interview, Al Kaabi underlined that Qatar Petroleum is pressing ahead with foreign as well as domestic expansion despite the global market turmoil caused by the corona-virus pandemic. He stated that QP is not scaling back a plan to build six new LNG production facilities, though commercial bids from contractors and the start of output will be delayed.

He said that the company had been expecting to receive final bids from contractors for the first phase – the North Field East project, which will involve the construction of four trains – this month. However, that was delayed as firms asked for more time to submit bids due to the global lockdown linked to coronavirus.

He said that will delay the award of the final main contracts, which cover major onshore engineering, procurement and construction, to the fourth quarter of this year, Al Kaabi said,’ We are going to be starting first LNG (production) in 2025, so the delay is for three to six months.”

He said that selecting partners “goes hand in hand” with finalizing the contractor bids, and will also happen before the end of the year, adding that QP has shortlisted six international oil firms for up to a 30% stake in the projects first phase.

He said however, there would be no delay in the second phase, which is known as the North Field South project and will boost Qatars LNG production capacity to 126 mtpa by 2027 through the construction of two more trains, or reduction in its scope. “We have zero projects that are being cancelled for the development of the North Field, he added.

On the question of global commodities prices coming down, Al Kaabi added that he expects commercial bids to come in at a lower rate.

Meanwhile, Qatar’s State Minister of Energy said that ‘We are moving full steam ahead with the North Field expansion. There is absolutely no hesitation on that. I think the world still needs this gas, with the cancellation of a lot of projects and companies reducing capital expenditure left and right due to the situation.”

Al Kaabi said that QP is still going to expand externally, and has always focused on upstream assets and is still interested in going ahead abroad. In this context, he underlined that the Golden Pass project was on schedule. “The Golden Pass is proceeding, thats our major expansion outside Qatar regarding our LNG portfolio,” he said. Qatar Petroleum is majority owner of the Golden Pass LNG terminal in Texas with 70%, with Exxon holding a 30% stake.

“We dont have a project that is on the table that we are taking off the table, we are always looking for opportunities,” he added.

QP and Exxon made a final investment decision to build the project in February and expect the project to begin production in 2024.

Al Kaabi said the company was looking at opportunities to reduce its operating costs and capital expenditure, but that would not impact the major projects it is working on. “QP is in a very good position financially. We have reduced our debt tremendously over the past years. We can weather the storm very easily,” he said.

He said that some of its foreign partners ask QP to raise debt for their own project finance, but QP will look at it at the right time, maybe next year.

In response to a question about some buyers of Qatari LNG issued a force majeure notice seeking to delay loading of LNG cargoes under long-term deals due to the demand drop. Al Kaabi said: “(They are) our partners for the long run and we will support them in the times of need.”

Force majeure is a clause in contracts typically referring to unexpected external circumstances that prevent a party from meeting their obligations.

He said while some buyers have asked to delay or even temporarily stop some shipments, others were able to take more LNG cargoes than in their contracts, and that QP has also sold some cargoes in the spot market.

He added that the company has delayed some routine and unnecessary maintenance, due to the spread of the corona-virus and constraints on movement.

“Reducing or stopping production of LNG is something that we don’t see happening for the time being,” Minister of State for Energy of State of Qatar said.

Doha, 24 Sept. 2022 (QE) QatarEnergy announced that it has selected ...
END_OF_DOCUMENT_TOKEN_TO_BE_REPLACED