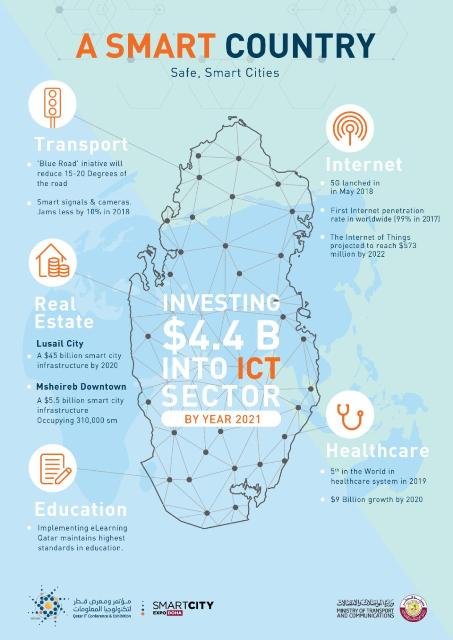 Cities around the world are increasingly transforming into ‘Smart Cities’ as rapid urbanization is exerting growing pressure on the traditional infrastructures. Smart Cities initiative, which integrate digital technology to optimize the efficiency of cities’ operations and services, are now the global trend due to the several economic benefits it offers including the potentials to boost the economic development of global cities by over 5% and deliver at least $20 trillion in additional economic benefits by 2026, according to a recent white paper by ABI Research on the ‘Role of Smart Cities for Economic Development’.

Singapore, that has developed a system that allows drivers to save up to 60 hours a year through autonomous taxis, to Chicago – where more than 500 sensors have turned this metropolis into a smart region with its traffic lights, street lighting and rubbish containers all connected to the internet and many others, the cities of the future are gradually emerging.

Realizing the enormous potentials of the Smart Cities initiative as one of the key factors to accelerate the achievement of all pillars of the Qatar National Vision 2030, the“Smart Qatar” initiative, also known as TASMU,  was launched by Qatar at the 2017 edition of the Qatar Information Technology Conference & Exhibition (QITCOM).  It focuses on five top priority sectors -Transportation, Healthcare, Logistics, Environment and Sports. The initiative is expected to generate significant revenue for Qatar’s growing economy and boost its development by over 5% while delivering at least $11 billion, out of a projected $275 billion nominal GDP, by 2022.

The backbone for smart cities is Internet Connectivity and Qatar has done extremely well in this regard. With the launch of the 5G telecoms on a commercially available network globally in May 2018, Qatar cemented its position as a world leader in high-speed broadband access for households and businesses.  It was ranked number one in the world in Internet penetration (99%) for the January 2017 to January 2018 period, according to ‘DIGITAL IN 2018’ Insight report published by ‘We Are Social and Hootsuite’ authored by Simon Kemp. The latest annual report released by Northwestern University in Qatar on Media Use in the Middle East survey also indicated that Qatar has one of the world’s highest Internet use rates with a saturation level at 95%.

The market size of the Internet of Things (IoT), a fundamental component of the smart cities,is growing exponentially in Qatar with sales projected to reach $573 million by 2022, compared to $172.5 million in 2018, while the monetary value of smart homes in Qatar is estimated to rise to $344 million, according to data from Statista, within the same period.

Statistics from Qatar’s Ministry of Transport and Communications (MoTC) indicated that the ICT sector is one of the major beneficiaries of the Smart Qatar initiative. Qatar’s ICT market, which was estimated to be around $3.9 billion in 2017, is expected to grow by 2.3 percent per annum to reach $4.4 billion in 2021. Figures from the International Data Corporation (IDC) predicted the software market in Qatar to reach some QR1.55 billion ($412 million), the IT service market to more than QR1 billion ($275 million) and the infrastructure market to more than QR800 million ($220 million), by 2021. In terms of growth, the cloud service segment is predicted to be the major gainer in this sector, witnessing a massive increase of up to 226% with spending expected to be in excess of $111 million.

Real Estate sector, Qatar’s model concept of smart cities is gradually turning into a reality with the Msheireb Downtown Doha and Lusail City projects at advance stages of completion. The $5.5 billion Msheireb Downtown Doha is a mixed-used development project occupying 310,000 square metres in the heart of Doha. It is regarded as the world’s first sustainable downtown regeneration project and the first downtown regeneration project embedding smart city technology and connectivity right from the start. The project, which is aimed at addressing a range of smart city pillars including smart economy, smart living, and smart environment; has won numerous awards including the Prestigious Smart City Award in Barcelona in 2018. It is also among the 2019 nominees for the Aga Khan Award for Architecture.

Lusail City also known as ‘Qatar’s Future City’, is a $45 billion smart city infrastructure being developed by Qatari Diar, the real estate arm of Qatar Investment Authority. When fully completed in 2020, the project will provide a switched on, high-technology environment comprising both wired and wireless communication networks to offer advanced services. The total estimated population of Lusail will eventually reach 450,000 people including 250,000 residents, 190,000 office workers and about 60,000 employees in retail stores thereby generating millions of riyals in revenue annually.

In healthcare, digital patient records and tele-medicine are helping evolve Qatar’s healthcare market, through cost-time optimisation and improved patient care. As Qatar’s healthcare providers rapidly adopt a wide range of connected solutions, the country’s healthcare market is set to grow by 50 percent, from $6 billion in 2016 to $9 billion by 2020, indicated a report by investment bank Alpen Capital. The country’s investment in smart technology in its healthcare sector has paid off as Qatar is currently ranked 5th best in the world and the first in the Middle Eastin terms of life expectancy, health outcomes, and investment in health infrastructure, according to Legatum Institute, a London-based think tank.

Education also ranks among the top sectors that have been impacted by the country’s smart cities’ drive. Through the e-education and e-accessibility initiatives such as the eLearning Portal and the accessible Qatar National Library, self-learning has become much easier as the populace gets faster access to information.

Overall, Qatar is not resting on its laurels in its commitment towards achieving a diversified economy that is predicated on technology and information and with QITCOM the horizon seems brighter than ever.

A diversified economy predicated on technology and information is at the heart of the Qatar National Vision 2030 and the vision is being driven by several initiatives including Qatar Information Technology Conference & Exhibition (QITCOM 2019), the largest Information and Communication Technology showcase and event in Qatar, being held under the theme “Safe Smart Cities” from 29th October to 1st November at the Qatar National Convention Center in Doha.

With over 100 speakers, 300 technology exhibitors, 100 startups and 300 innovators invited, QITCOM 2019 aims to be a one-stop-shop for participants to showcase disruptive smart technologies and exchange next-generation knowledge in the bid to effectively position Qatar as a regional leader in creating a Smart City ecosystem through an integrated approach.