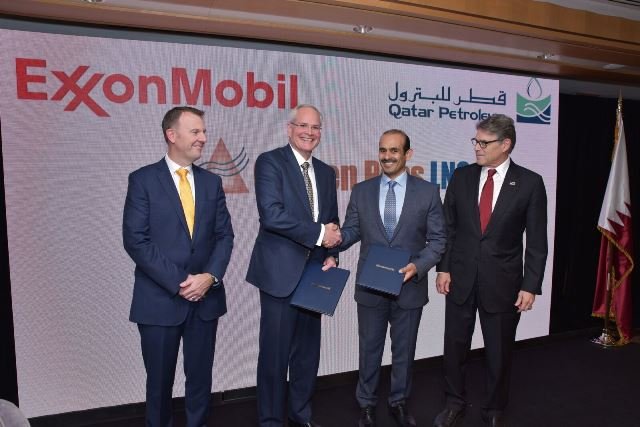 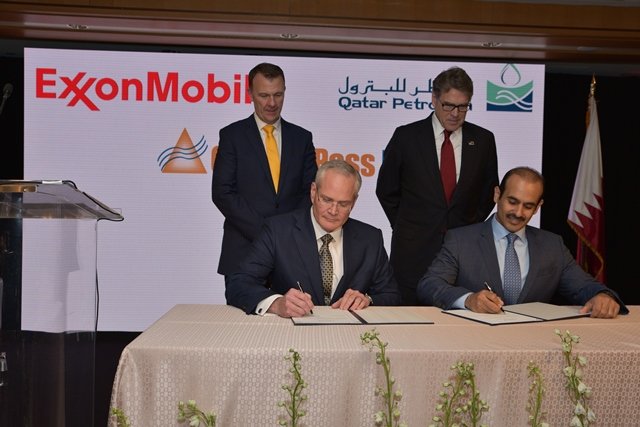 The decision to proceed with the $10+ billion investment was announced during a special ceremony held in Washington D.C. on Tuesday in presence of Saad Sherida Al-Kaabi, Minister of State for Energy Affairs, President and CEO of Qatar Petroleum, Rick Perry, U.S. Secretary of Energy, Darren Woods, Chairman and CEO of Exxon Mobil Corporation and senior executives from Qatar Petroleum, ExxonMobil and Golden Pass LNG.

The final investment decision will pave the way for the construction of the Golden Pass LNG export facility, which will have a production capacity of about 16 million tons of LNG per year. Project execution activities will commence in the near future, and are expected to create in excess of 45,000 direct and indirect full-time jobs in the U.S. during the construction period, which is expected to take about 5 years. It is estimated that the project will generate more than 35 billion dollars of economic benefits in the U.S. including federal, state and local tax revenues over the life of the project.

Speaking at the ceremony, Al-Kaabi thanked Secretary Perry for being part of this important event, and said “your presence here today is a testament to the depth and strength of the strategic bilateral relations between the United States and the State of Qatar, and to the commitment of both sides for expanding and reinforcing bilateral cooperation in the field of energy.”

Al-Kaabi added “The Golden Pass LNG export project is not our first investment in the United States, and is certainly not going to be our last. It represents a significant part of the plans that Qatar Petroleum had announced to invest 20 billion dollars in the U.S. energy sector, which we believe would bring great benefits for both the United States and the State of Qatar.”

Highlighting the significance of this event in the context of the U.S. LNG industry, he said “this investment of over 10 billion dollars is of a particular importance as one of the largest single investment decisions in U.S. LNG history.”

Al-Kaabi said “I would like to take this opportunity to thank Mr. Darren Woods and the whole ExxonMobil organization for our successful long-term partnership. I would also like to thank the management and staff of Golden Pass LNG, Chiyoda, McDermott and Zachry for all their efforts to get us to this important milestone. We will all continue working together towards the successful execution of this project, which will benefit the U.S. economy and the neighboring local communities in the U.S. gulf coast. I would also like to thank the various state and federal agencies involved in the permitting and regulatory processes for their support.”

Al-Kaabi added: “The development of the Golden Pass LNG export facility enhances the depth and flexibility of our global LNG supply portfolio, and reinforces the position of the U.S. as a key contributor to meeting the world’s growing demand for LNG.”

Al-Kaabi concluded by saying “I would like to express our sincere gratitude to His Highness Sheikh Tamim Bin Hamad Al-Thani, The Amir of the State of Qatar, for his guidance and unwavering support to Qatar Petroleum. I would also like to thank the executive management team and employees of Qatar Petroleum for their hard work and dedication.”

Rick Perry, the U.S. Secretary of Energy, said “Today’s agreement is the latest example of the vital partnership between the U.S. and Qatar – from American universities putting campuses in Qatar, to our strategic military relationship, and of course, our collaboration in the energy sector.”

“The Golden Pass project is proof that two of the world’s top energy producers can work together as allies to increase energy diversity, advance energy security, and support rather than subvert an open energy marketplace,” Secretary Perry added.

The Chairman and CEO of ExxonMobil Corporation, Darren Woods said “Qatar Petroleum and ExxonMobil have for decades successfully demonstrated their capabilities of producing, shipping and marketing natural gas globally.”

The project’s Engineering, Procurement and Construction (EPC) contract was awarded to a consortium comprising Chiyoda, McDermott and Zachry and was executed at the ceremony by senior executives representing the consortium together with Golden Pass LNG.