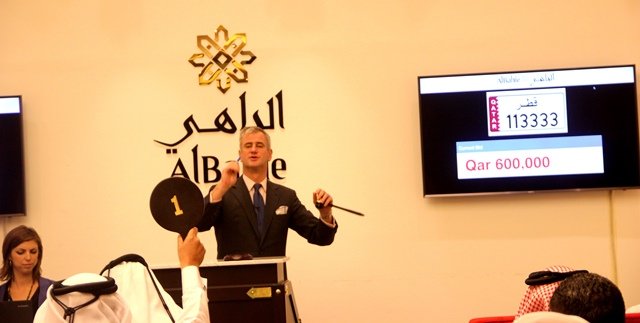 Organised by Qatar based AlBahie Auction House, first ever international auction house in the Middle East had 37 number plates to offer in auction of their Second Car Plate numbers, total nine (09) including one commercial vehicle with its plate were sold out for a total amount of QAR 2.30 million.

Bidders were mix both collectors and investors in vehicle car plate numbers.

There are couple platforms in Qatar selling fancy car numbers including Ministry of Interior, On-line and at the Katara Cultural Village Foundation base Albahie Auction House (Building 22).

Edward Rising, Auctioneer from London was flown specially to conduct this event by the Katara Cultural Village based Auction House.

Speaking on the occasion, Nabil Abu Issa, Chairman Abu Issa Holding, Blue Salon fame and promoters of ‘Albahie Auction House’ said on the occasion “We are very satisfied with the turnout of bidders despite the fact that the auction was basically meant for local buyers and was for the Qatari number plates,” said Nabil Abu Issa,