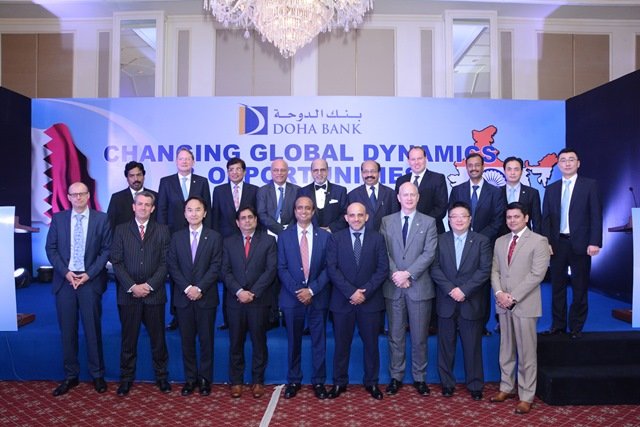 The event was attended by Key Management staff from public and private sectors of Maharashtra.

Suresh Prabhu, Minister of Railways, Government of India in his key note address recalled the historical bond between India and GCC countries and with Qatar in particular. He emphasized that Qatari capital and Indian Entrepreneurship would go very well hand in hand for setting up commercially viable projects and such a coordination between the two countries would be very beneficial for both the countries.

Dr. R. Seetharaman, CEO, Doha Bank giving an insight on Global scenario said in his address that “The recent IMF outlook had given global growth of 3.1 percent in 2016. A more subdued outlook for advanced economies following the June U.K. vote in favor of leaving the European Union and weaker-than-expected growth in the United States. As a result, the 2016 growth forecast for advanced economies has been marked down to 1.6 percent. Emerging and developing economies expected to grow by 4.2 percent this year.’

He said ‘Last week the Federal Reserve raised its benchmark interest rate for just the second time since the financial crisis of 2008 and have predicted three rate increases in 2017. Most of the GCC Central Banks have hiked the interest rates in response to Fed’s Action.’

‘Policy makers in Saudi Arabia, the United Arab Emirates, Kuwait, Bahrain and Qatar raised borrowing costs within hours after the Fed raised its benchmark rate for the first time this year.’

‘The recent demonetization reform is a short term pain but will be a long term gain for Indian economy, it is a step in the right direction towards more transparency, governance and ease of doing business. Foreign Direct Investment (FDI) inflows into India in 2015-16 was $55.4 Billion.”

‘GCC Sovereign Wealth funds can look forward to participate in India’s infrastructure development. UAE and India have agreed to collaborate closely to identify bottlenecks to trade and new areas of trade with the aim of increasing two way trade by 60 per cent in five years while significantly boosting investment. The new goal set by both sides is to boost trade by 60 per cent by 2020.”

Dr. R. Seetharaman highlighted on Qatar–India bilateral relationships said “Qatar economy expected to grow by 3.4% in 2017. Qatar-India bilateral trade is close to $10 billion. There is a large market for Qatar’s LNG, oil and petrochemical sectors in India.’

‘In December 2015 RasGas Company and Petronet LNG Limited have entered into a binding sale and purchase agreement (SPA) for the supply of an additional one million tonnes per annum (mta) of LNG to India starting in 2016. Indian companies were ready to invest in both upstream and downstream projects in Qatar in the hydrocarbon sector.’

‘India could meet Qatari needs in the area of food security. Qatar and India can look beyond the buyer-seller relationship to include joint ventures, joint research and development and joint exploration. Indian can invest in the port sector of Qatar. Indian companies can participate in Qatar’s infrastructure development pertaining to FIFA World Cup 2022.’

‘Qatar and India will enhance bilateral cooperation in the field of cyber security, including prevention of the use of cyberspace in support of terrorism and extremism, CEO Doha Bank said.

Shailesh Haribhakthi, Chairman, DH Consultant Pvt. Ltd visualized what would be India in the year 2035 after the impact of Demonetization and other reforms launched by the Government so far. He firmly believed that there would not be any cash transaction in India as the entire country would go digital and India would grow rapidly with the benefits of reforms.