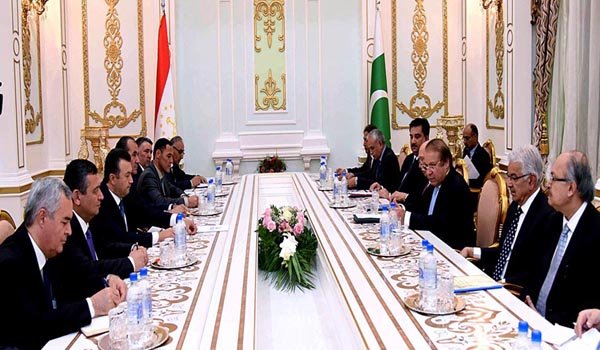 Pakistan and Tajikistan Wednesday agreed on the need of exploring new avenues of cooperation in agriculture, education and culture sectors besides improving business-to-business and people-to-people ties.

Pakistani Prime Minister who is in Tajikistan on a two-day official visit met his Tajik counterpart Qohir Rasulzoda here at the State Guest House and discussed a whole range of bilateral issues. He was accompanied by a high-level delegation including his Adviser on Foreign Affairs Sartaj Aziz, Minister of Commerce Khurram Dastgir and Minister for Water & Power Khawaja Muhammad Asif.

Prime Minister Sharif said both the sides were committed to further strengthening their relationship in diverse spheres so as to build into a multi-dimensional partnership.

He said there was a tremendous potential to boost trade and hoped that the two countries would be able to achieve their target of US 500 million dollars soon.

The two leaders noted the improvement in bilateral trade and called for identifying the weak areas and to take necessary measures to address these issues.

They pointed the need to determine new traditional and non-traditional trading goods and services. In this regard, they directed the Joint Ministerial Commission to formulate a comprehensive framework.

Both the sides also agreed on the need to holding exhibitions to promote their products.

Prime Minister Qohir welcomed Pakistan’s inclusion into the SCO and hoped it would be beneficial for the security of the entire region. He also pointed to the holding of the Joint Commission on Energy and
Infrastructure on the sidelines of his visit.

Both the leaders expressed the belief that early completion of the CASA 1000 and its completion by 2018 would be beneficial for the people of the region.

They also noted the need of resumption of flights between the two countries to boost people-to-people and business-to-business contacts.