Is Lower Global Inflation Temporary? A Study by QNB 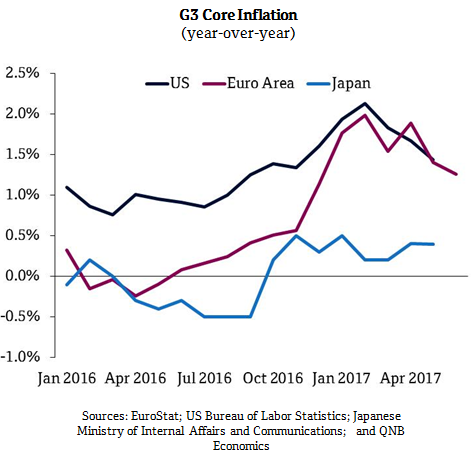 Worries about falling inflation have resurfaced. Despite improving labour markets and strong growth, core inflation in advanced economies remains benign. This apparent paradox has caused some to argue that there is still some labour market weakness which is not being fully captured in headline measures and that inflation is unlikely to return to target absent additional stimulus.

Central banks, while cautious, have largely looked through the current spell of weaker inflation as transient and maintained their tightening biases. We explore both sides of this argument and find our position to be somewhere in the middle. Progress in the labour market indicates inflationary pressures are building, but at a slower rate than policymakers might like.

Central banks believe lower inflation is largely temporary for three main reasons. First, the improvement in labour markets across advanced economies has been dramatic. The US, Japan and the UK are already at full employment and the Euro Area is in rapid approach. Labour scarcity is increasing which, in turn, will raise bargaining power for higher wages and gradually translate into an increase in inflation. This has already been partially observed in the US where wage growth has consistently averaged above 2.5% for over a year.

Second, monetary policy remains broadly accommodating. Despite some tightening in the US, policy rates are still close to historical lows and support is only gradually being removed, suggesting that there is room for even further gains in labour markets.

Third, and specific to the US, the current bout of weaker inflation largely reflects one-time factors. Methodological changes to how some components are calculated and the introduction of new regulations have artificially weighed down core inflation (See our recent commentary, Fed eager to tighten despite inflation worries).

What then drives the concerns about low inflation? Broadly speaking, the concern is the persistence of low wage growth. This has occurred mainly outside of the US although even wages in the US have stagnated since the start of the year. Underlying this trend is believed to be a worsening quality of jobs. The impressive gains in the labour market have been partially led by increases in part-time employment across advanced economies since the financial crisis. These jobs are associated with lower wages and are largely involuntary, creating conditions of underemployment which weighs on spending intentions and ultimately prices.

Moreover, the relationship between low unemployment and inflation itself may have changed in the aftermath of the financial crisis. Firms’ uncertainty over the economic recovery may be causing them to partly absorb rather than pass-through higher input costs to consumers. Also, some of the workers re-entering the labour force endured prolonged periods of unemployment resulting in skill deterioration. Such workers, it is speculated, will have reduced bargaining power and might prioritize job security over higher wages.

Our view is that labour market gains have been too large and persistent to dismiss. While involuntary part-time employment remains high and the response of prices to lower slack might be different post-crisis, these developments are likely slowing the feed-through of demand to higher prices rather than preventing it from happening at all.

As the economic recovery continues to gain traction, as suggested by the latest activity data for advanced economies, we expect inflation dynamics to become increasingly durable and self-sustaining.