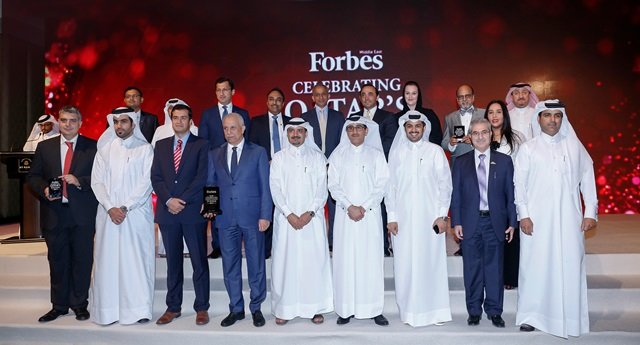 Forbes Middle East today held an exclusive event to recognize Qatar’s top companies in 2017. The event lauded the efforts of these companies and government initiatives on a path of diversification. The companies in the list are achieving success and strengthening the status of the country’s economy, making it one of the strongest economies in the world.

The ceremony was in partnership and under the patronage of the Ministry of Economy and Commerce and was represented by Abdulbaset Al Ajji, Director of the Business Development and Investment Promotion.

Abdulaziz Bin Nasser Al-Khalifa, CEO, Qatar Development Bank said that today’s award given to him belongs to QDB as it is achievement of QDB not my personal. But for us we have not yet reach to our destination though we are in right direction. He said that what we want is that SMEs sector to play their major role.

Khuloud Al Omian, Editor in Chief, Forbes Middle East said “Under the wise leadership of His Highness Sheikh Tamim bin Hamad Al Thani, the Emir of Qatar is witnessing a comprehensive economic renaissance. We are proud to announce the very first list of the Top Companies in Qatar, which is part of our continuous efforts to promote economic growth across the Arab world.”

Mohammed Maher Al-Jabari, CEO’s Assistant of Islamic Insurance after receiving award of his company said that it was a moment of proud of him for receiving this award. ‘Such initiatives will support and encourage business houses at the highest level. ‘Today’s recognition of an Islamic Insurance Company does witness importance of religious factor in the region as it is traditionally contradicts with the conventional financial system. Gulf is a huge market and a big number of people are interested in dealing in Islamic economic system. Today’s recognition certainly will promote this idea,’ Al-Jabari said.

The 40 Qatari listed companies were ranked on four metrics: sales, net profits, assets and market value. Each company received four separate scores based on where it ranked in each metric. Loss making companies got zero score in the net profits metric. All the scores were equally weighted to reach a composite score and thus rankings were structured.

These companies were from 13 different sectors, with banks and financial services sector dominating the list with nine companies, followed by diversified and insurance with five companies each.

Market value and currency conversions were as of April 6, 2016 and excerpts from audited financial statements of the year 2015 were incorporated.

The exclusive event was held in Doha and hosted leaders from various sectors, business heads in the public and private sector and diplomats from across the Arab region.

Forbes Middle East has support from valued partners including the Ministry of Economy & Commerce as the main partner; The St. Regis Doha, the Finest Address, situated in Al Gassar resort in Qatar’s bustling capital, as hospitality partner; Danube Properties, one of the leading property development companies in the U.A.E as support partner; 360 Nautica, a venture and growth capital platform helping entrepreneurs grow from idea to a sustainable business, as industry partner; Gulf Times, one of the leading English dailies of the region, as English print partner; and Al Raya, region’s top-read Arabic daily newspaper, as the media partner.

The event was managed by Tarteeb Media.