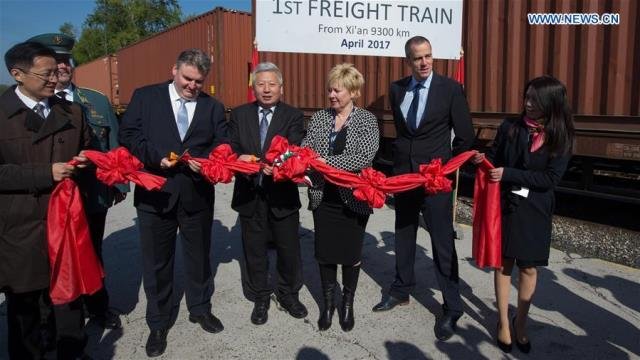 The first freight train from Xi’an, China to Budapest arrived here on Friday.

“The arrival of the train is the symbol of the revival of the old Silk Road from an economic aspect,” Deputy Secretary of State Tamas Molnar, who is responsible for customs and international affairs of the Ministry of National Economy, said at a welcoming reception of the train.

“It is also a recognition for Hungary and its entrepreneurs, who have yet again proven to be part of Europe’s elite, as we have been chosen as the location for custom clearing,” he added.

The cargo train left Xi’an, capital of China’s Shaanxi province, for Budapest on April 1. It passed through Kazakhstan, Russia, Belarus, Poland and Slovakia before reaching Budapest.

The train, which has a total of 41 carriages, brought mostly clothes, toys and electronic products from Yiwu city in Zhejiang province.

“The time of travel of the goods between China and Hungary has been greatly reduced, thus, its efficiency has much increased,” Duan Jielong, Chinese Ambassador to Hungary, said in his welcoming speech.

“This route plays a very important role in the bilateral trade,” he added, thanking both the Chinese and the Hungarian governments for their joint efforts.

“I hope that our mutual efforts and cooperation will lead to new results,” he added. In 2016, the Sino-Hungarian bilateral trade volume reached 8.89 billion U.S. dollars.