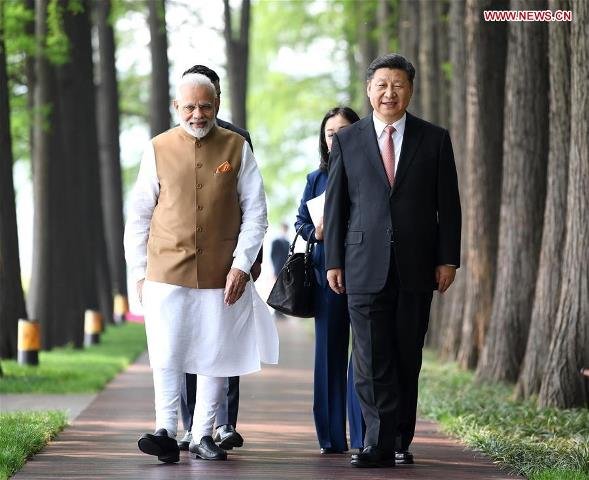 Chinese President Xi Jinping has said that mutual trust is the basis for the stable development of Sino-Indian relations.

Xi made the remarks when holding an informal meeting with Indian Prime Minister Narendra Modi on Friday and Saturday in the central Chinese city of Wuhan.

Hailing the sound development of bilateral ties, Xi said that the two countries have forged a closer development partnership and made progress on exchanges and cooperation in various fields.

“We have paid reciprocal visits, met on multiple occasions, and reached many important consensuses over the past three years, which acted as a guidance to the positive development momentum of bilateral ties,” Xi said.

China and India, as the two biggest developing countries and two emerging economies each with a population of over 1 billion, are both important engines of global economic growth, as well as backbone forces for promoting multipolarization and economic globalization, Xi said.

The international situation is undergoing a critical period of changes and adjustment, and countries around the world are now more inter-connected and rely on each other, said Xi, noting that “the trend of peace and development is irreversible.”

“A sound China-India relationship is an important, positive factor for safeguarding world stability, and means a lot to the development and progress of all human beings,” Xi said.

China and India face similar tasks in their pursuit of development and rejuvenation, as socialism with Chinese characteristics has entered a new era, and the goal of building a “new India” has been proposed, Xi said.

He called on the two sides to focus on development and deepen mutually beneficial cooperation, so as to achieve national rejuvenation, create an Asia featuring stability, development and prosperity in the 21st century,and make a positive contribution to global peace and development.

“China and India should be good neighbors and friends,” Xi said. “The two countries should regard each other as a positive factor in the balance of global power and take each other as partners for realizing the dream of development.”

China and India are getting stronger and stronger, and this represents an irresistible trend and offers important opportunities to each other, Xi said.

Both China and India stand for an independent foreign policy, he said, calling on the two sides to correctly analyze and view each other’s intentions with a positive, open and inclusive attitude.

“China and India have many similar ideas in international affairs,” said Xi.

He said, in developing relations between major countries, China upholds strategic autonomy as well as non-conflict and non-confrontation, and insists on building a new-type of international relations featuring mutual respect, fairness and justice, and win-win cooperation, which are in line with the Five Principles of Peaceful Co-existence jointly advocated by China and India in the 1950s.

Xi stressed that in the next stage, China and India should jointly plan for all-round cooperation, carry out closer strategic communication, and timely conduct consultation on major issues of common concern, so as to take a firm hold of the general direction of bilateral relations and ensure the effective operation of their dialogue mechanism.

He said that the two sides should carry out more in-depth pragmatic cooperation and more extensive cultural and people-to-people exchanges, and handle their differences in a more mature manner.

He suggested both sides strengthen coordination and cooperation in international and regional affairs, and jointly promote regional economic integration and interconnectivity.

China is ready to make joint efforts with India to create a stable and prosperous Asia in the 21st century and promote the development of the international order in a more just and reasonable direction, Xi said.

Modi thanked President Xi for his invitation, saying he had a candid and in-depth exchanges with President Xi and learnt about the profound Jing-Chu local culture during his visit.

Modi said he felt that President Xi has attached great importance to and has guided the development of India-China relations.

India and China are countries with ancient civilizations and important neighbors, he said, calling on the two sides to strengthen dialogue, exchanges and cooperation, and maintain peaceful co-existence and ever-lasting friendship.

Modi said he paid high attention to the announcement at the 19th National Congress of the Communist Party of China (CPC) that socialism with Chinese characteristics had entered a new era, while India has its own goal of a “new India.”

He agreed with Xi that as two largest developing countries with a combined population of 2.6 billion and two large emerging economies, India and China are stabilizing factors of the world.

He said the development of India and China has important influence on the world, and has positive significance to the vast developing countries.

India and China should make joint efforts in making greater contribution to peace, stability and prosperity of Asia and the world in the 21st century, Modi said, agreeing to maintain high-level strategic communication with China.

The two countries have common concept, a common resolve and common visions in developing bilateral ties, he said.

Modi suggested that the two sides should strengthen contacts and cooperation, enhance mutual understanding and trust, properly handle and control their differences and boost people-to-people friendship, so as to upgrade bilateral relations to a new level.

Modi said India was ready to work with China to promote the common interests of all developing countries.