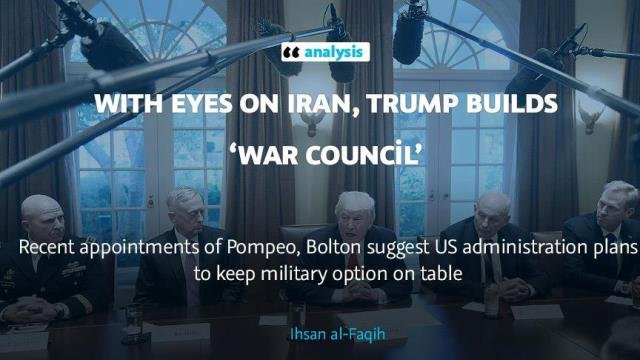 The 69-year-old has a long history of adopting hardline positions and showing a readiness to use military force overseas as evidenced by the “preemptive war” doctrine embraced by President George W. Bush (2001-2009), who launched wars on both Afghanistan (2001) and Iraq (2003).

Under Bush, Bolton served as both undersecretary of state for arms control and international security affairs (2001-2005) and as U.S. ambassador to the UN (2005-2006).

He was a vocal supporter of regime change during the U.S.-led war against Saddam Hussein’s Iraq in 1990/91 and maintained this orientation under the George W. Bush administration, which would end up invading — and occupying — both Afghanistan (2001) and Iraq (2003).

The younger Bush took the decision to invade Iraq when Bolton was serving as undersecretary of state. In the run-up to the invasion, Bolton exerted pressure on decision-making circles — including the CIA and the U.S. National Security Council — to endorse Bush’s decision.

With his appointment last week as national security adviser, the Trump administration appeared to follow the policies of the Bush era, which was dominated by the pro-war “neo-conservative” movement.

The national security adviser’s most significant function is to provide the president with options, alternatives and information relevant to political and/or military decision-making.

Bolton does not hide his preference for the use of force against Iran and North Korea in response to perceived threats to U.S. national security on the pretext that both these countries boast a nuclear capacity and are generally antagonistic to the U.S.

Bolton’s appointment was made in the run-up to historic peace talks with North Korea (expected in May) and shortly after Trump’s remarks on March 20, in which he — in the presence of Saudi Crown Prince Mohammed bin Salman — voiced his refusal to allow Iran to threaten global stability.

Just before signing the six-nation nuclear agreement with Iran in 2015, Bolton had argued that Tehran would never abandon its nuclear program and that U.S. sanctions would not be enough to deter it from developing a nuclear-weapons capacity.

Bolton’s latest appointment, experts say, along with that of Mike Pompeo — a former CIA director — as secretary of state, suggests the nuclear deal with Iran will be revoked by Washington.

Others, including Trita Parsi, head of the National Iranian American Council, have gone further, saying the appointment of Bolton and Pompeo was tantamount to a “declaration of war” on Iran.

Before his appointment, Bolton told members of Iran’s opposition People’s Mujahideen in Paris that Trump should “review” his policies on Iran and that the U.S. should openly call for regime change.

In Iran, there has been a general sense of pessimism regarding the nuclear deal, especially since the appointment of Pompeo, who, like Trump, has described it as “terrible”.

Trump believes there are only two options regarding the deal with Iran — to withdraw from it or to “do something else”. But given that the agreement is not a bilateral one between Iran and the U.S., Washington’s choices in this regard are limited.

Iranian Deputy Foreign Minister Abbas Araghji, for his part, believes Washington “is determined” to withdraw from the deal and that Pompeo was appointed expressly for this purpose.

While some voices in Tehran say Iran should abandon its obligations as laid out in the agreement if the U.S. withdraws, Iranian President Hassan Rouhani has reiterated his country’s commitment to the deal — even if the U.S. abandons it — “as long as it benefits Iran”.

Before his appointment, Bolton did not appear to put much stock in diplomacy as a means of resolving the dispute with North Korea.

His appointment, however, comes only weeks ahead of a meeting, slated for May, which will bring together — for the first time ever — the U.S. and North Korean leaders.

Bolton’s appointment came following a series of resignations by senior administration officials — resignations that have left Trump surrounded by officials who largely agree with his views on major foreign policy issues, including North Korea and Iran.

Bolton’s appointment appears to suggest that Trump is building a “war council” stacked with hardliners who favor a muscular foreign policy.

That council, which now includes both Bolton and Pompeo, is now awaiting a successor to Defense Secretary James Matiss, who many observers believe is on the verge of being replaced by Trump.